Posted By: Retrofit Magazine Editor May 9, 2016

LaMar Lighting’s VO-LED Series luminaires are part of the West Palm Beach Veterans Affairs Medical Center’s (VAMC) renovation intended to reduce energy consumption and maintenance and enhance illumination. A member of LaMar’s occu-smart family of motion-controlled bi-level lighting, the VO-LED fixtures have the potential to save up to 88 percent of energy costs while providing a safe and well-lit environment. 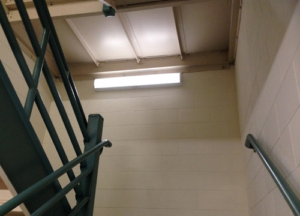 For unoccupied times, the VO-LED luminaires offer multiple low-light levels and time-delay options, which can be adjusted by the installer.

The VAMC provides primary and secondary level health care to eligible veterans in a seven-county area along Florida’s Treasure Coast. All U.S. federal facilities are tasked with reducing energy intensity by 3 percent annually or by 30 percent by 2015 with 2003 as a baseline. The West Palm Beach VAMC has been doing a number of projects to reduce energy consumption and costs, and the lighting retrofit is the latest in a series of improvements.

The original 1- to 32-watt fixtures in staircases were on at full 38-watt output all year round to provide emergency egress, even though staircases typically have low-occupancy patterns. For unoccupied times, the VO-LED luminaires offer multiple low-light levels and time-delay options, which can be adjusted by the installer. Replacing the existing fixtures with the VO-LED units on five floors allowed the VAMC to reduce energy consumption because the VO-LED occu-smart luminaires were set to standby light levels of 8-watt illumination output when staircases were unoccupied. At the same time, occu-smart’s ultra-sonic motion sensor switches on to full illumination output of 24-watt whenever someone enters the space.

“The legacy fixtures sent the light primarily downward while the VO-LED units have a nearly 180-degree distribution for a more uniform illumination, which is also brighter than it was previously,” says Andres Dieppa, Principal, Genesis Lighting, who assisted contractor Gulf Building, Ft. Lauderdale, with finding the best solution for the VAMC’s lighting needs.

The VO-LED fixtures are rated for more than 50,000 hours and offer long, economical operation, not only reducing energy costs but requiring little maintenance. At the VAMC, the total of 270 48-inch-long units in the standard 4,000K color option were wall- and ceiling-mounted on every staircase landing. The installation of the VO-LED units took about two weeks. To ensure a smooth and easy process, LaMar Lighting’s staff supplied detailed instructions to the installer on how and where to install each fixture.

“LaMar’s occu-smart product is truly a perfect solution for stairwells,” says Dieppa. “It provided the right amount of light, allowed cost-savings due to the occu-smart feature, reduced maintenance needs, offered a five-year part-replacement warranty, and had the right price to make the ROI work.”

Suite of LED Luminaires Can Be Suspended or Wall-mounted