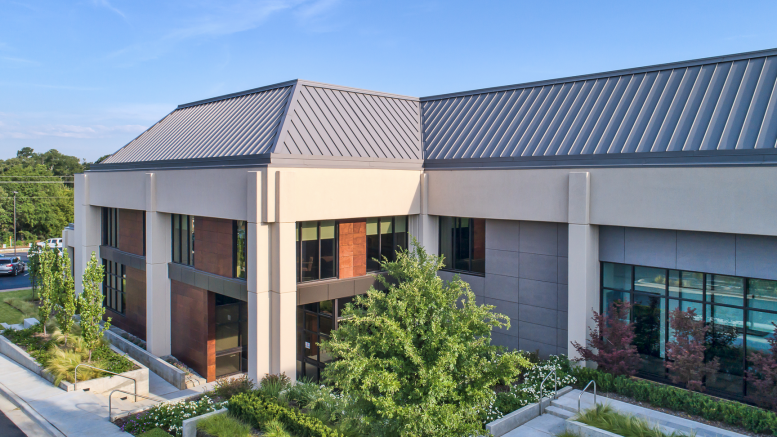 When Southside Bank in Texas began a campaign to modernize its brand, management understood that the buildings it occupies play a significant role in branding. The existing flagship branch in Tyler, Texas, was re-imagined and renovated inside and out to reflect the contemporary way the bank now interacts with its customers.

“The tiles were the main design element we wanted on the entryways, to function as both wall and roof material, to blur the line between roof and wall,” Humphries says. “Metal tiles have been around in Europe for centuries, and we employed the PAC-CLAD Precision Series TS Tile as a modern option. Metal has a timelessness that is appealing, and in this project it achieved the aesthetic vision and performance needs we established.” The tile concept on the entryways was such a success on this project that it will be duplicated on many other Southside Bank buildings.

Humphries likes the metal tile’s low profile and that it adds texture to the wall. “I especially like the way the light interacts on the tile’s surface, which allows for a wall that changes its appearance as the sun progresses across the sky throughout the day,” he says.

When selecting products for any project, Humphries values how long a product has been on the market. “Even though the Precision Series TS Tile hasn’t been around a long time, it was Petersen’s version of a product with proven history and that was good enough for us,” he adds.

Where the tile on the entryways met the standing-seam roof, a junction not often encountered was created. The tile-to-panel junction was easy to deal with because ultimately it was a simple metal-to-metal joint, Humphries notes. “Additionally, the tile allowed for a 45-degree turn without requiring edge band.”

A metal roof was chosen because of metal’s longevity and the need to blend into the building’s design, notes Humphries, who typically specifies some kind of metal element on every project. Design challenges included peeling back and sorting through the multiple phases of additions and renovations inside and outside of the building, ultimately to be truer to the original design of the building. “For example, in the 1970s they added a concrete superstructure. But in the ’90s, rather than removing it, they built a giant green mansard roofs over it. Over time the building’s design became a mixture of ideas with no clear vision in mind. Our job was to simplify and unify everything,” he explains.

This project was the first one for installing contractor Curtis-McKinley Roofing and Sheet Metal in Longview, Texas, on which metal tile was involved, says Anthony McKinley, vice president, estimator and project manager. “The tiles tied into a valley with the existing roof, so we made sure they were cut properly and flanged,” he said. “Installation of the tile and standing seam roof was straightforward for our experienced crew. It was a slower process working with the tiles because we wanted to make sure the lines were straight, level and square. The details were custom so we took a little longer to make sure we measured correctly and got it looking right.”

All metal work on the building was performed by McKinley’s team. “This job was large in scope mainly because of the removal and replacement of the mansard roofing,” McKinley says. “After taking off the roof panels, we removed fake dormers to create a straight, plain look. We tore everything down to the wood deck. Ultimately we were at least six months on the job site. Most of our time was spent removing the existing metal, which required a man lift, which is a slow process.”

“We felt it was important to make sure the owner and architect liked what we were doing by not making design decisions on our own,” McKinley adds. “Some jobs you know what to do, but on this one we wanted to make sure the architect liked it. We figured out details to make it work for integrity and water intrusion, but also to give the architect the look he wanted. We figured out the details on our own because those typically aren’t specified.” Edge metal was fabricated by McKinley’s crew.

Curtis-McKinley is a proud Petersen customer. “We love working with PAC-CLAD. They have superior products, and the technical help Petersen provides is very valuable,” McKinley says.