Fifty years ago, attending a live performance was a special occasion: the chance to step out in one’s finery, rub shoulders with high society and experience art in an exclusive setting. 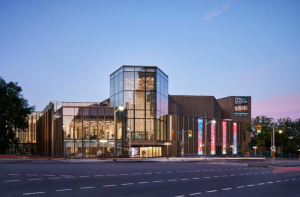 An essential player in energizing the addition is the hexagonal glass entry tower named the Kipnes Lantern.

Today, arts organizations relate to the public in fundamentally different ways than they did in the 1960s. They are eager to invite the public in—not only to view performances but also to participate in a range of experiences. This desire to engage the public catalyzed a $225 million rejuvenation project for the National Arts Centre in Canada’s capital city, Ottawa, Ontario.

“Art centers want to create an environment that welcomes anyone and everyone,” notes Jennifer Mallard, senior associate and project architect at To- ronto-based Diamond Schmitt Architects (DSA). The firm initially provided a feasibility study and the subsequent design for the National Arts Centre to change its relationship with the downtown core. “Before this rejuvenation project, the National Arts Centre building had its back to the city and there was no indication of the activity inside. Now the building entry is transparent and accessible. People can see everything from opera to hip-hop to slam poetry here or gather in the new lobby for pre-performance talks, morning meditations or swing by for a cup of coffee.”

The 1.2-million-square-foot Brutalist building is a geometrically intricate concrete form. Opened in 1969, a public square had been planned on the site’s east side and the center was designed to face that square. The public plaza was never built, however, and Mallard says the main entrance always seemed to be on the wrong side of the building.

Creating a new front door that communicated with the city was a prime project goal. DSA saw a natural location for the entry on the northwest corner at an outdoor terrace that was rarely used in Ottawa’s snowy climate. DSA enclosed the north terrace, and the addition literally emerges from the former foundation with a 3-story entry tower and connected double-height atrium.

The three new wings of public space project openness and activity. “Compared to the 1-million-square-foot concrete behemoth, the 60,000-square-feet addition is so small, but it has a huge visual and functional impact that completely transforms the National Arts Centre,” Mallard says.

An essential player in energizing the addition is the hexagonal glass entry tower named the Kipnes Lantern. A transparent LED screen hung like a scrim inside the lantern glazing publicly showcases artists and the productions inside. Situated on Elgin Street (one of the capital’s busiest streets), the lantern is technologically linked to a series of four, vertical, single- story LED screens called light blades that line an adjacent wall. This connection allows
for active visual integration. For example, the screens can display a ballerina that dances across the light blades and onto the lantern.

Mallard says the lantern is more than a beacon for the National Arts Centre alone, however. The center’s civic context is significant because, combined with the adjacent Rideau Canal, it’s a UNESCO Heritage site; Parliament Hill, Confederation Square and the National War Memorial are only steps away.

“The lantern’s design had to be considered carefully because events at the national war memorial are somber, and the lantern had to be respectful,” Mallard explains. “The lantern serves as a community tool. It can be used on Remembrance Day to broadcast poetry or display poppies as a part of the memorial’s ceremony, and it speaks to the national institution’s outreach mission by displaying art exhibitions and performances that are taking place across the county.” 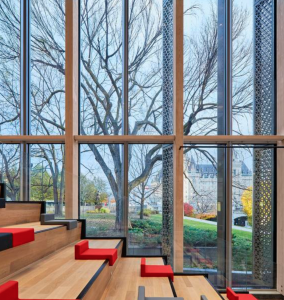 The use of wood brings in a natural material; glass and steel were used as contrasts to the original concrete.

With a structural grid composed of equilateral triangles, the entire building was designed as a combination of hexagons. “The geometry of the original building was so strong and the hexagonal design was fascinating,” Mallard says. “We wanted to create a refreshing look at that rigorous geometry in a way that felt contemporary, so we used wood to bring in a natural material and glass and steel as contrast to the concrete.”

To bring in light, the new wings are constructed of exposed wood and framed on a custom-designed glass curtainwall system. High-performance, low-e glass units extend up to 95 inches by 228 inches to provide uninterrupted views with the added benefit of controlling solar heat gain. The addition’s interior spaces gleam with white oak flooring and wall paneling. Limestone flooring hails from a local quarry. Structural columns in glulam Douglas fir—treated with a white pickled semi-transparent stain—continue the bright color palette.

Handmade Tiles Are Made of More Than 70 Percent Recycled Content