The Air Force institution harnesses the power of the sun to not only power student labs, but also to power cadets’ daily appliances, from coffeemakers to computers. The Air Force also ensures solar technologies are studied by the students to help them develop interest in renewable energies, as well as make midshipmen more aware of their excessive energy consumption. 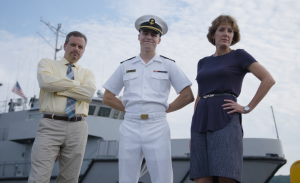 The Navy’s energy team was particularly impressed with its rival’s solar-roof technology.

The Navy team thought the challenge meant much more than simply developing an energy-efficient campus in Annapolis. Helping cadets become more energy conscious at the academy is essential to the sustainability of Naval assets once cadets are deployed. The Navy relies on a constant supply of energy when sailors are deployed and operational. However, logistical demands for energy replenishment put Marine Corps and Naval assets at risk, making energy-efficiency practices all the more critical to cadets.

Both academies face similar challenges when it comes to food waste because of the thousands of people who dine on their campuses every day. Using its bio digester, the Naval Academy converts food waste into compost for local farmers—a practice that can positively impact hundreds of universities and their local communities if replicated.

The Navy also processes its food waste into pulp. Once the pulp is gathered and stored, an inoculate is introduced to the waste in the bio digester. The bacteria eat the pulp, digest it and create methane gas that is converted into electricity. If the Navy elicits 60 megawatt-hours of electric energy from the bio digester, it can achieve a net benefit of $7,000 per month. [Learn more about turning food waste into energy in retrofit’s May-June 2014 issue, page 56.]

The Naval Academy’s success with a bio digester on its campus inspired the Air Force Academy team to think differently about food waste and apply its own waste strategy in Colorado Springs. With food waste being a concern for most campuses across the U.S., these military academies could develop a successful model to reduce wasted scraps.

The Navy and Air Force teams have taken advanced measures to ensure their campuses are energy efficient, but after participating in the SWAP, they found ways to increase efficiency even further. Through the SWAP, DOE is continuing to show how easy and thrilling it is to change the culture among leaders who literally hold the keys to energy-efficiency implementation, encouraging energy technicians to share their efficiency playbook, even if it’s with a bitter rival.

Season three of the Better Buildings Challenge SWAP will feature energy leaders from Boston and Atlanta. Follow these two cities’ energy teams this spring to learn what efficiency ideas they discover to better power communities of millions.

The U.S. Naval and Air Force Academies’ buildings in Annapolis, Md., and Colorado Springs, Colo., respectively, are overseen by the Washington, D.C.- based U.S. General Services Administration. The Air Force and Navy will work with the GSA to implement the upgrades uncovered in the SWAP. However, the GSA was not tremendously involved in motivating the academies to participate in the SWAP. The Naval and Air Force Academies independently agreed to participate in the Better Buildings Challenge SWAP to promote the military institutions’ energy-efficiency efforts.

The U.S. Department of Energy, Washington, D.C. chose these academies to participate in the SWAP be- cause their campuses include large academic facilities that can provide a great example for other college campuses around the country. Ultimately, DOE would like to see other federal agencies and college campuses apply the SWAP lessons to their own operations.

Register for Free IEQ and Energy Efficiency Webcast from ASHRAE