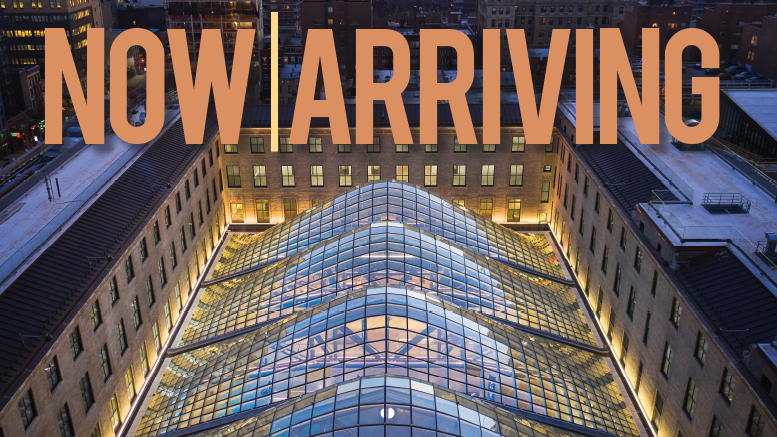 It was an idea first proposed in the 1990s that took nearly three decades to reach fruition, despite support from governors, senators and even presidents. It’s the rebirth of a massive Beaux Arts post-office building by McKim, Meade and White, once considered the nation’s foremost architecture firm, into New York’s next great train station. It’s a shot at redemption after the city demolished a landmark here—the original light-filled, circa-1910 Pennsylvania Station—and replaced it with a subterranean version that to say lacks grandeur is being kind.

Moynihan Train Hall, a new gateway for Amtrak passengers at Penn built from the renovated James A. Farley Building next door (along Eighth Avenue between 31st and 33rd Streets), is a throwback to the great railway palaces of the late 19th and early 20th century. Opened in January 2021 but only now seeing a large capacity of passengers, its glass roof and column-free space give Amtrak passengers the kind of light-filled, majestic gateway befitting America’s largest city and cultural capitol. Although it only affects about 30,000 out of 300,000 daily Penn passengers (most of whom ride commuter lines), after so long underground, everyone is happy to see the light.

“Converting the Farley post office into a modern train station outside of its original intended purpose, it was somewhat of an unknown,” says Douglas Carr, executive director of the Moynihan Station Development Corporation for Empire State Development, a state agency. “But the large column-free spaces that the post office utilized, we knew that would be an asset: for circulation, pedestrian flow, visual connectivity to the tracks and platforms. It was a good canvas to work with.”

Today, as thousands of riders pass through Moynihan, “It’s hard not to notice the light, the skylights being an iconic feature of the train hall and enabling light into a Penn Station for the first time in over 50 years,” Carr adds. “Clearly that’s transformative in terms of the overall experience.”

Moynihan station helps restore some of the grandeur of rail travel that was lost with the 1963 demolition of the original light-filled Penn Station. “The old Penn Station was almost like the Taj Mahal of train stations. It was the largest building in the world at the time of its construction, which eventually proved to be difficult for the city to justify when ridership declined with the rise of air travel,” says architect Jon Cicconi, AIA, a senior associate principal at Skidmore, Owings and Merrill, the firm that designed Moynihan. “That’s ultimately one of the reasons why the building ended up being demolished. The greatest ambition of this project was to restore the dignity of rail travel and the humanity of entering the city by train.”

While the project’s gestation took decades, the former post office was an ideal candidate for conversion to a train station because the tracks were already underneath. But unlike at Penn Station, with riders often traveling multiple stories underground to reach their trains, under the Farley there is only one level. “For us, part of the improvement is the intuitive wayfinding that you now have in the train hall by being able to see clear expanses back to that column-free space,” Carr explains.

Back when it was still a post office, mail came to Farley on trains, was sorted up- stairs and distributed across the Northeast. “There was a literal foundation upon which to build. We didn’t have to increase any train infrastructure capacity that already existed,” Carr says. It also was in some ways a dead ringer for the long-gone old station. The 4-story, granite-clad Farley features on its Eight Avenue side (facing the former Penn) a long Corinthian colonnade of 20 columns, each over 50-feet tall. The design matched the original Penn’s colonnade, also designed by McKim, Mead and White.

At the same time, building Moynihan and transforming the existing subterranean Penn Station (the busiest train station in the western hemisphere), all while it remained fully operational, “required a highly orchestrated set of track outages,” Carr adds, “where we would be able to take over certain platforms for a limited amount of time over the weekends and restore service Monday by 5 a.m.”

The architects at SOM first designed Moynihan station in the late ’90s, but it was not what you see today. Each of three versions turned the massive former mail-sorting room—with its wide-open, column-free space—into the new waiting area. Each design restored a version of the original glass ceiling that had, before it was covered and drop ceilings installed by the post office, filled the space. Yet over time, the design got simpler and more of the Farley’s DNA was retained.

The first iteration, which dazzled Sen. Daniel Patrick Moynihan (the project’s biggest elected champion) and even President Bill Clinton in the late ’90s, featured a large combination skylight and glass pavilion rising hundreds of feet above the station. “I remember being in grad school and seeing the design of that come out,” Cicconi says. “That was one of the reasons I wanted to come to SOM, actually.”