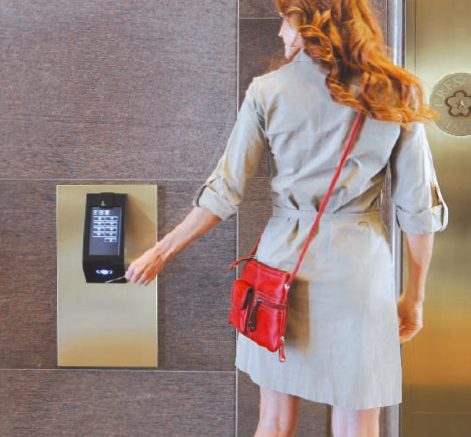 A PORT card reader device identifies personalized passenger information and selects the elevator that will provide the most efficient route to passenger destinations.

Dallas, which is the ninth largest city in the U.S., is part of the Dallas/Fort Worth/Arlington conurbation, also referred to as the Dallas Metroplex. This is a booming commercial area with a population in excess of 6 million that, among other things, is home to 23 billionaires. Dallas is the third most popular business destination in the U.S. and, while it is best known as a major center of commerce, it also offers its share of amenities in terms of cultural, media and sports diversions.

Within a Dallas business area known as the Uptown-Turtle Creek district is The Crescent Office Towers.

Within a business area known as the Uptown-Turtle Creek district is The Crescent Office Towers. Completed in 1986, the towers are a centerpiece of the Dallas Class A office landscape and part of a complex that encompasses an upscale hotel and a wide selection of retail establishments and restaurants. The Crescent, as it is known, totals 1,134,826 square feet of office space in three contiguous buildings with a 19-story center structure and two adjoining 18-story structures. The Crescent is home to the Dallas offices of some of the world’s best-known financial firms, including Goldman Sachs, Morgan Stanley SmithBarney, Citibank, Credit Suisse, Deutsche Bank, Merrill Lynch, and J.P. Morgan Chase & Co. It is conveniently located on the edge of the Dallas Central Business District and offers easy access to major highways. The Crescent also reflects the dynamic aspects of the Uptown-Turtle Creek district, thanks to premier restaurants, shops and service amenities located within the complex.

In Texas, water is a precious resource and The Crescent works diligently to conserve it, along with sustained efforts at improving overall energy efficiency. Chilled water is used as the source for The Crescent’s air-conditioning system and provides 4,100 tons of cooling capacity. The cooling is accomplished by chilling the water to 35 degrees at night, during off-peak utility rate hours. The system stores approximately 1,275,000 gallons of water in storage tanks, where it is funneled through heat exchangers during the day, and later the warm water is returned to the tanks, where it is again chilled overnight. 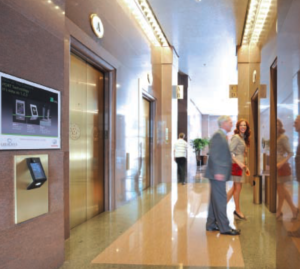 PORT Technology employs a futuristic interface positioned at access points and elevators around the building.

The Crescent’s novel approach to moving water through its buildings is complemented by its ingenious approach to moving another vital resource—people. Schindler, which services all 50 elevators and six escalators throughout the entire office towers site, suggested its PORT (Personal Occupant Requirement Terminal) elevator technology to move occupants faster and more efficiently through The Crescent, making it the first building in Dallas to benefit from the advanced destination-dispatch system. PORT Technology transforms the way occupants navigate and move around the building, while increasing efficiency and energy savings in the process. A phased modernization process is bringing PORT Technology to the three towers one at a time and includes major equipment upgrades such as energy-efficient Power Factor 1 drives.

PORT Technology acts as the central nervous system of a building by providing a two-way communication interface between the occupants and Crescent’s environment. The system employs a sleek, futuristic interface positioned at access points and elevators around the building. The operating software is capable of calculating the optimum route to any destination within the building and also “learns” how its occupants typically move around. PORT Technology then instructs the elevators to direct and transport people quickly
and safely to their individual destinations. Furthermore, Schindler’s patented technology works with RFID badges to identify passengers and call elevators for personal service.

A PORT card reader device identifies
personalized passenger information and selects the elevator that will provide
the most efficient route to passenger destinations.

Rick Flusche, Crescent’s assistant manager, operations, explains: “With the PORT Technology, we are not just buying an elevator modernization for today, but a system for the future, one that is scalable and expandable. The access control features with RFID badges provide personalized ‘concierge service’ to our Crescent tenants, and add security and value to our building.”

Crescent facility managers can configure the system to accommodate a wide range of needs in real time. Whether it’s helping to meet new energy-efficiency goals, updating security or adapting to people with special needs, customization can be achieved with PORT Technology consistent with The Crescent’s exceptional level of service to its tenants and visitors.