What do most food-service professionals do with the tons of weekly food scraps they create while prepping, cooking and cleaning up after meals? A few may compost the waste but most dump it in the garbage where it is hauled away to a landfill. As it breaks down, the food waste produces methane gas, which pound-for-pound impacts climate change 20-times more than carbon dioxide during a 100-year period, according to the U.S. Environmental Protection Agency, Washington, D.C. The EPA also points out more than 60 percent of total methane emissions come from industry; agriculture; and waste-management activities, including food waste from hospitals, hotels, casinos, sporting arenas and grocery stores. 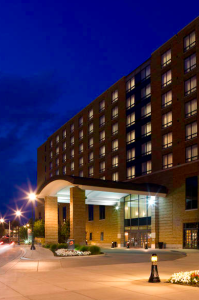 Methane gas actually is a valuable fuel. It can be captured and converted into natural gas and electricity. Every ton of food waste diverted from a landfill and sent to an anaerobic digester may create 94 cubic meters of methane gas, which is enough to heat the average single-family home for two weeks and power the same home for 11 days. The remaining byproduct of this process is a natural fertilizer.

The Ohio State University’s Blackwell Inn and Pfahl Conference Center, which is adjacent to the Ohio Stadium—home of the Buckeyes football team—in Columbus, is among the first food-service businesses to send its food waste to an anaerobic digester for conversion to energy. Not only is the program helping the university meet its sustainability goals, it also dramatically decreased the Blackwell Inn’s trash-management and -removal costs while minimizing food-waste-related odors and pests.

Ohio State likes to say its school colors are scarlet, gray and green. Visitors to the university’s website can view a dashboard showing the energy usage of campus buildings, and Ohio Stadium currently is the largest stadium in the country striving to achieve zero waste through recycling and composting.

The Blackwell Inn and Pfahl Conference Center is another campus building Ohio State believed would benefit from composting. “In a normal week we produce 4 to 6 tons of food waste, and during football season it’s 8 to 10 tons a week,” says Lori Pratt, the Blackwell Inn’s food and beverage director. About 80 percent of food waste is created during food preparation. At the Blackwell Inn, food waste may consist of leftovers after cutting, coring and dicing fruit for a buffet, as well as bones and trimmings left at a serving station after a meal.

Because of the amount of food waste the Blackwell Inn was generating, composting was not an ideal solution. Pratt’s stewarding staff was dumping food into 30-gallon cans housed in the inn’s trash dock. The smell of decomposing food attracted fruit flies and necessitated trucks haul the waste away to a farm for composting three times per week. “The amount of our product was so consistent that it started being hauled to an anaerobic digester plant here in Columbus,” Pratt notes.

According to quasar energy group, the Cleveland-based waste-management company that takes the Blackwell Inn’s food waste, anaerobic digestion is a process in which microorganisms break down organic material in the absence of oxygen and create biogas, which can be captured to produce electricity, pipeline-quality natural gas and vehicle fuel. Current underground deposits of natural gas in the U.S. actually were created millions of years ago by anaerobic digestion of organic materials. quasar can generate a renewable form of natural gas in a matter of days through anaerobic digestion of biobased lubricants, crop residuals, food waste, fats, manure, municipal wastewater, oils and greases, and personal-care products.

quasar had a relationship with Racine, Wis.-based InSinkErator, a division of global technology conglomerate Emerson Electric Co. InSinkErator was in the process of developing a grinding system specifically for preparing food waste for use in anaerobic digesters. About two years ago, InSinkErator and quasar approached Ohio State’s Blackwell Inn to assist InSinkErator as it developed the grinding system. Pratt shared feedback with InSinkErator while she and her stewarding team tried out iterations of the Grind2Energy machine installed in the Blackwell Inn’s trash dock.

Unusual and Inspiring Projects and Strategies Are Applauded