Every April at Baldwin Wallace University’s Bach Festival, approximately six members of the university’s brass choir carry their instruments to the cupola atop historic Marting Hall and perform from on high. The Berea, Ohio, university’s ornate building tower offers an apt setting for the festival, which symbolizes Baldwin Wallace’s commitment to artistic and academic excellence. When the cupola’s paint started to peel, however, crews discovered the tower’s cladding was deteriorating and the cupola needed its own version of artistic talent to maintain the building’s character. 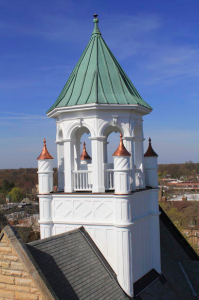 To obtain the profile of the original mouldings, some of the PVC versions are a combination of four or five different sheets put together and then turned down. Custom-ground knives were made for the moulder to match the profiles before the pieces
were sent through the CNC machine. PHOTO: Versatex

Local building restoration company American International Construction had been working at the Baldwin Wallace campus for more than a decade and Bill Kerbusch, the university’s director of buildings and grounds, tasked the company with the cupola’s restoration. “It turned out to be a very intense project,” Kerbusch says. “Every little piece up there had to be refabricated to match the original.”

Designed by the firm of Cramer and Fugman, Marting Hall was dedicated in 1897. The building is home to offices and classrooms for the history, religion and English departments. The 13-foot 11-inch by 13-foot 11-inch cupola’s construction was wood frame covered in thin galvanized tin. The metal work was so intricate that Bill Perry, contractor and project manager for American International Construction, says he had never seen anything like it. “It was tremendous sheet-metal work,” Perry asserts. “These craftsmen made mouldings by rounding flat sheet metal. Five different pieces of metal were attached with 1-inch nails and then leaded together. It was all flashed together perfectly. The detailing was incredible.”

The wood frame below the galvanized tin was in good condition but the team knew it could not replicate the metal work. Exterior details could be refabricated in wood but they would rot eventually, and the types of wood that hold up best outdoors–Spanish cedar and mahogany–were very expensive. PVC presented a unique solution. Recladding the wood frame in PVC made the project financially feasible, and it would be virtually impervious to the weather, offering long-term durability and low maintenance.

Perry’s office undertook extensive research and located original photos through the university, but neither the university archives nor the Library of Congress had original drawings. To remain true to the historic profiles, everything on the cupola had to be meticulously field measured. Perry enlisted Bill Sandrock, owner and manager of Stratton Creek Wood Works, Kinsman, Ohio, to help fabricate the job. Perry and Sandrock divided the tasks and worked very closely together. American International Construction undertook all the flat vertical and horizontal pieces that had to fit seamlessly together, as well as the spires, and Stratton Creek Wood Works fabricated the round mouldings, handrails, corbels and column covers. Some of these pieces were slowly disassembled, taken to Sandrock’s shop and recreated, while Perry kept others to verify and change drawing dimensions as pieces were produced. 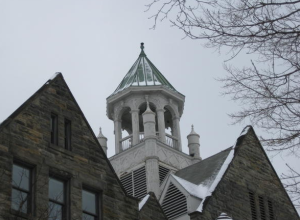 The job demanded exceptional attention to detail. For example, to obtain the profile of the original mouldings, some of the PVC versions are a combination of four or five different sheets put together and then turned down. Custom-ground knives were made for the moulder to match the profiles before the pieces were sent through the machine.

Accurate drawings were critical for proper duplication. “I painstakingly hand drew each of my pieces in AutoCAD and sent them to the CNC [computer numerical controlled] equipment,” Sandrock describes. “We did a lot of the curved pieces on the CNC router because it allows us to do intricate work that was once done by hand more cost-efficiently. Even with the help of machines, the detailed millwork took us approximately 1,100 man-hours.”

Details were just one facet of the job. Getting exact dimensions was a significant effort. The original sheet metal had a 1/100-inch thickness and the PVC material was 3/4- to 1 1/2-inches thick. “That changes the depth and height of the pieces, as well as all the intersections,” Perry says. “We had to take that into account and glue the laminate pieces together to get the right thickness for it to look like the original.”

To complicate matters, all the original metal pieces had been hand-hammered into shape, so each piece was unique. When one piece on the cupola had a 5-inch detail and a corresponding piece measured only 4 1/2 inches, Perry and Sandrock would split the difference in their fabrications.