There’s a not-so-silent war that’s being waged in corporate offices all across America that’s threatening productivity, not to mention people’s sanity. Since the unceremonious death of the cubicle in the ’90s and the emergence of hip, cool office spaces, like those flaunted by the likes of Google and Facebook, it seems most modern workplaces have followed suit and are characterized by one common feature: an open plan in which there are no private offices or cubicles to keep employees from seeing and engaging with one another. 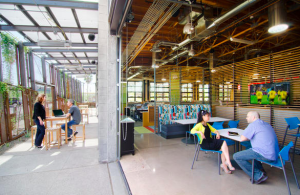 Privacy is not necessarily limited to interior spaces. In the DPR headquarters in Phoenix, SmithGroupJJR created interior, exterior, and in-between spaces where employees can meet or work privately. PHOTO: SmithGroupJJR; ©Gregg Mastorakos

Flip through any design magazine and you’ll find glossy photos of offices without walls, game rooms, and cozy cafés and lounges (see “Trend Alert”, November-December 2013 issue, page 56) that promise to inspire creativity, promote greater collaboration, provide access to outdoor views and daylight, and contribute to an overall sense of satisfaction with the once-stuffy workplace. So what’s the problem?

For all the positive benefits the open plan office has delivered, there is a major downside: a noticeable lack of visual and acoustic privacy. The same people who once dreamed of re-enacting the scene from the movie “Office Space,” in which the protagonist took the liberty of deconstructing his own cubicle wall with a cordless drill, are now, in fact, looking for a quiet place to avoid the constant interruptions that result from working in a “fishbowl” and—get this—focus on work.

A 2012 New York Times article revealed that while physical barriers have been coming down, office workers have quite literally been building them back up. “They barricade themselves behind file cabinets. They fortify their partitions with towers of books and papers,” the author noted, or they employ another visual cue to hang the proverbial “do not disturb” sign on their personal work space: headphones.

“Headphones are the new wall,” one office worker astutely observed in the Times article.

Recent research from global furniture manufacturer, Grand Rapids, Mich.-based Steelcase, goes so far as to suggest that there is a “privacy crisis” happening. The research confirms that insufficient privacy in the workplace is not only an issue here in the U.S., but around the world. The company’s survey results revealed “being able to concentrate, work in teams without being interrupted or choose where to work based on the task are frequently unmet needs.” Further, of the 10,500 workers polled in North America, Europe and Asia for the study, only 11 percent who had more privacy were also found to be more engaged and satisfied with their workplace.

Not convinced? Consider the more substantive impact and consequences of distraction and disengagement in the workplace: According to the Gallup 2013 “State of the Global Workplace Report”, the cost of employee disengagement in the U.S. alone is estimated at $450 to $550 billion. If that statistic seems high, think about the fact that the average office worker is interrupted every 11 minutes andthat it takes up to 23 minutes for the same employee to get reengaged and back on task, according to a University of California, Irvine, study by Gloria Mark. Perhaps even more interesting is another statistic discovered by Dr. Glen Wilson at the University of London, which revealed that men, on average, lose a total of 15 IQ points while multitasking while women lose five IQ points— a reduction in cognitive ability that is sure to have a measurable impact on the quality of work performed.

The privacy pendulum, as it were, appears to have swung too far.

“Privacy is more important than ever, and I think that the misconception of a lot of [building] owners and employers is that if they reduce the footprint and put everybody in these open work environments then they’re just going to collaborate all day long and save real estate,” observes Allison Arnone, LEED AP, EDAC, principal planner and workplace strategist, HDR Architecture Inc., Princeton, N.J. “The trend across every market sector is to increase collaboration, and it certainly has benefits to improve all kinds of things. But there are huge negative consequences to not having a balanced environment that provides privacy.”

Part of the misconception stems from a faulty definition of the term “open office,” according to Zach Meade, lead designer at San Francisco-based architecture and design firm, Blitz. What most people think of when they hear the phrase is a large space without walls and a seemingly endless series of workstations linked together with a few meeting rooms sprinkled in for good measure.

“That’s not the case at all,” Meade suggests. “I don’t think that’s the kind of place that anyone would really want to work in. When we say open office environment, we’re talking about opening up the spaces but also creating zones where people can actually come together as groups and utilize spaces together.”

Be the first to comment on "The Open Office Concept Has Promised Greater Collaboration and Creativity in the Workplace. But Has It Come at the Cost of Our Privacy?"