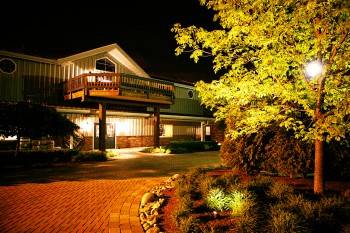 Dean Vaundry and Chuck JaBaay transformed a Varco Pruden metal building that housed their landscaping equipment into a successful event venue, which hosts about 200 events per year.

A Landscaping Business Turns an Equipment Warehouse into an Event Venue

Dean Vaundry and Chuck JaBaay believe in taking chances. In 1992, the pair left successful careers to make their hobby—landscaping and building decks—a business. They bought 10 acres of farmland outside of Frankfort, Ill., which is 36 miles south of Chicago, and erected an 8,000-square-foot metal building in which to store their landscaping equipment and house their carpentry shop where they would create custom gazebos and pergolas as JaBaay’s Outdoor Creations.

Vaundry and JaBaay knew they’d have to live in the building for a period of time, so they made it comfortable enough for them. “We designed the building knowing we’d have to live there, so we included an upstairs loft with a pool table. We have a nice sound system because Chuck and I really like music,” Vaundry says.

Dean Vaundry and Chuck JaBaay transformed a Varco Pruden metal building that housed their landscaping equipment into a successful event venue, which hosts about 200 events per year.

In addition, the pair added unique characteristics to the building’s exterior to showcase some of the design features they could create with their business. Vaundry explains: “We put a pergola right on the building, and we put pavers on the concrete apron to dress it up. It became a display. Our landscape customers would come here so we could show them waterfalls and built-in fireplaces, and, of course, everything was landscaped very nicely.”

After forming JaBaay’s Outdoor Creations, the partners began sponsoring an annual fundraiser for a Down Syndrome organization. The event was held inside the metal building. “When we had an event we would move all the vehicles out and pressure wash inside,” Vaundry remembers. “Pretty soon we were getting 1,000 people out here for the event and as people started seeing the building and how unique it was, they started asking if they could have their kids’ birthday parties and other events here.”

Before they knew it, Vaundry and JaBaay were hosting enough events that the county required them to file for a permit. Vaundry decided to also seek a liquor license, which is highly unusual for a landscaping business. Thanks to support from the community, they received the liquor license and decided to make special events and banquets a second business, CD & ME. “We built another metal building about 200 yards away from this one where we now store all of our landscaping equipment,” Vaundry explains. “We started doing additional stuff inside the first metal building to make it even nicer.” 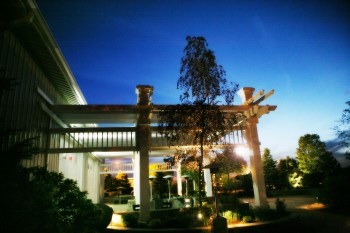 For example, the original doors were removed and replaced with large glass doors that can be opened in nice weather or can provide great views of the property even when they’re closed. A stage for bands was installed and wooden balconies and stairs were added so weddings could be held in the loft overlooking the reception area below. Brick walls were built inside to warm up the color scheme. Air conditioning was installed as were men’s and women’s restrooms, and the building was made ADA-compliant. of installing a hardwood floor to match the wood on the balconies and stairs.

CD & ME currently holds about 200 events per year—everything from charitable and political fundraisers to birthday parties and weddings. The building annually hosts a live broadcast by Roe and Roeper, Chicago-based talk-radio personalities, and even is staged four times per month for traffic court.

The success of the event venue has led to more business for JaBaay’s Outdoor Creations. “We don’t do a lot of advertising but we bring thousands of people through our building who see our landscaping, waterfall
and brick pavers and realize it would look nice in their backyards. We have found a lot of uses for this building; it’s certainly not your typical banquet hall. My partner and I have always thought out of the box. That’s the best way of selling.”