Kirk Noyes doesn’t flaunt a fancy title. He’s simply a “human being” who has spent the past 40 years redeveloping abandoned buildings—mostly schools—into residential communities. His business model is a bit different from most developers. He operates Gloucester Development Team Inc., a 501(c)(3) with the goal of improving quality of life for low- and moderate-income people on Cape Ann, Mass., which includes the communities of Essex, Gloucester and Rockport.

Noyes’ reputation for doing good work has expanded his business across the U.S., precipitating the creation of a second organization under which he develops buildings outside of Cape Ann. No matter where his vocation takes him, Noyes only works on buildings listed on the National Register of Historic Places, and he always provides a social benefit to the communities in which he works.

He refers to his work as “something of a private urban renewal agency” and, as such, embraces the opportunity to improve communities while thoughtfully retrofitting buildings that have significant meaning to citizens. 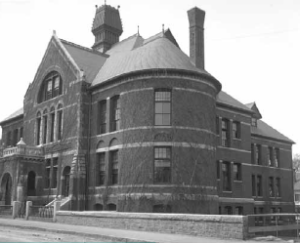 Noyes’ first project was Central Grammar, which was built in 1889 as a high school in Gloucester, Mass. This photo was taken circa 1910.

r: How did you get involved in developing property?

Noyes: When I graduated with a master’s degree in architecture, we were involved in the Vietnam War and I was drafted through the lottery draft. I was a conscientious objector and wanted to fulfill my obligation in a manner compatible with my education and social conscience. I was hired by a Gloucester community action program to help it get into housing development. I quickly learned it is very difficult, without capital, to tie up raw land, but I could buy abandoned buildings or tie them up long enough to get financing in place. My first major project was Central Grammar, which was built as a high school in 1889. It is right across from Gloucester’s City Hall and no one knew what to do with it. I convinced the City Council and city manager to sell the building to the nonprofit I planned to set up. I kept that option alive for three years for $1 per year.

I had, at that point, figured out the intricacies of financing. I like to say that when I got out of school I quickly learned what I refer to as the Golden Rule: “He who has the gold makes the rules.” I became much more of a developer and a builder than an architect. I am actively involved in the design of all the buildings we develop, but that’s just part of the formula.

Noyes: When I was working for the community action program and started Central Grammar—80 units, $2 million in 1974—I needed capital. To raise the capital required of the developer, I sold the tax advantages inherent in the finished building to wealthy people—a process called syndication. These tax advantages could include depreciation and/or historic or low-income credits, and upper income people or corporations will pay 27 to 30 cents on the development dollar for these credits. A nonprofit developer can take a fee out of that development process as long as the proceeds are used to pursue the non-profit’s originally stated goals. 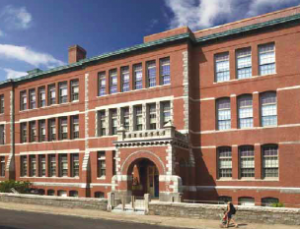 Central Grammar, which is located across from Gloucester City Hall, had been abandoned but now features 80 housing units.

Also, to provide financial strength to our request for bank financing of Central Grammar, our negotiations with general contractors included the requirement that they act as our co-general partner and provide their net worth as backing for the project. Then, once the project was 97 percent rented, the GC would relinquish his role as co-general partner and would become a limited partner, thus taking advantage of the tax credits.

The director of the community action program had no idea what I was doing and was concerned I was going to jeopardize his program’s limited financial resources, so he told me to take the project and do whatever I wanted with it. I set up the nonprofit and asked four or five professionals whom I had met in town, who were about my age—28— to join me. We’ve been together now for 40 years. We just finished an $18 million project where we sold historic tax credits to Apple and the low-income tax credit to TD Bank and Prudential Insurance. Our development fee was $1 million.

Post is Inaugurated as the Chancellor of the College of Fellows