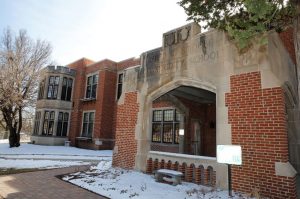 When school representatives decided to improve the facilities, the school needed a versatile HVAC upgrade that balanced efficiency with the unique design needs of a historic building with several floors of varying environments. Most importantly, Smouse Opportunity School required an HVAC system that would improve the overall comfort and learning environment of the classrooms to help meet the diverse needs of the student body, as well as maintain the building’s unique and historic architectural details.

Specifically, in classrooms, the system had to be quiet so it wouldn’t disrupt lessons. In other rooms, such as offices and the teachers’ lounge, as well as in hallways, the system needed to be minimally invasive to preserve the architecture. The system also needed to be centrally controlled to ensure the rooms were kept at a consistent temperature and could not be accidentally adjusted within the learning spaces.

After researching potential solutions, LG’s Variable Refrigerant Flow (VRF) Multi V Water IV system was selected for its ability to deliver all of Smouse Opportunity School’s requirements. Installed during a 10-week summer vacation, the Multi V Water IV hooked into the adjacent school’s central plant that already had a cooling tower and boiler to easily incorporate the LG water-cooled condensing units in the basement. From there, the refrigerant piping was routed to the varying zones established in the school.

In the hallways where space was limited and the walls are decorated with original hand-painted tile, narrow refrigerant lines were routed through underground tunnels where hydronic piping previously existed. By reusing the existing lines, the team avoided disrupting the historic architecture and delicate tilework while saving money on the installation.

Throughout the school, a mix of ducted and duct-free indoor units were installed that worked best with the architecture and the needs of the space. In the teachers’ lounge, which features elaborate hand-carved wood walls and accents, LG floor-mounted units were installed inside existing casework rendering them invisible and unobtrusive to the intricate woodwork. In the atrium, a space that wasn’t previously conditioned, pre-existing openings were repurposed to disguise the ducted units—maintaining the aesthetic.

In the classrooms where minimal sound disruption was critical, indoor units were installed that operate as low as 36 dB(A)—a noise level equivalent to a quiet library.

“The LG Multi V system is inherently very, very quiet,” says Dave Chongo, principal, senior mechanical engineer, KCL Engineering. “That played a very important part in this building. Some of the kids are sensitive to vibration, sensitive to noise, sensitive to light, and the LG VRF systems are so quiet you can’t even tell that they’re there.”

LG’s remote temperature sensors were installed in each classroom to monitor the individual environments. These remote sensors report into a central control unit, allowing administrators to monitor and ensure each classroom’s temperature was kept consistent. The whole school system was then connected, via an ACP BACnet, to the Des Moines school system so representatives could oversee operation at a district level.

Originally commissioned in 1931 and designed for students with special needs, Smouse Opportunity School was one of the first schools in Iowa to create a conducive learning environment for those students unable to attend a traditional public school because of physical or mental disabilities. Designed to accommodate the unique requirements of its students, Smouse Opportunity School is equipped with resources, such as a hydrotherapy tank, temperature-controlled classrooms, rooms designed to carry vibrations for hearing-impaired students, tilted blackboards to prevent glare for the visually impaired, a resting room and swimming pool.

In addition to the school’s personalized learning environment, the facility also features beautiful architectural elements from the building’s original structure, such as ornate wood carvings and hallways adorned with hand-painted ceramic tiles. Because of its turn-of-the-century design and long-standing contribution to the Des Moines community, Smouse Opportunity School has been listed on the National Register of Historic Places since 2002.

Improve Acoustics with Board Products