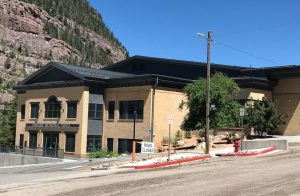 Renovations at Ouray School includes the installation of a standing-seam metal roof system with a snow guard system to ensure the safety of students, faculty and visitors.

The historic school’s latest renovation included installation of a new standing-seam metal roof system with a snow guard system to ensure the safety of students, faculty and visitors.

“We wanted a continuous snow guard system, instead of individual plastic pieces that are screwed down through the roof,” says Joel Cox, AIA, of RTA Architects. “The ColorGard is attached without penetrating the roof … . There is pedestrian traffic on three sides of the building, so preventing snow and ice from sliding off the roof was obviously important. … We have one row about 1-foot up from the eave, a second row about a quarter way up the roof and another row about midway up the roof, spaced in line with S-5! suggestions.”

The original school, which was built in 1883 when the school district was founded, was destroyed by fire in 1936. A new facility then was constructed adjacent to the original site. Additions were made to the school in the 1970s, ’90s and in 2003. After a full assessment in 2014, the existing facilities were found to be structurally safe and worthy of a thorough renovation, including the addition of a standing-seam metal roof that covered the entire building, including the additions.

The project was a two-phase renovation that involved improvements to the 1936 structure. The redesigned facility includes 21st century learning spaces to support modern curriculum delivery and an emphasis on safety for all students and staff. The renovation included south and southeast vestibule additions, security upgrades, new entry steps and windows, HVAC system upgrades, a new fire-alarm system to meet current codes and the addition of a full-building sprinkler system.
Photos in S-5 folder