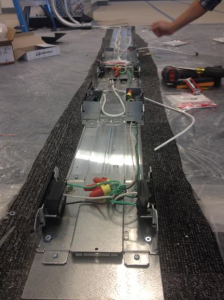 When the owners moved quickly to renovate the building’s 16th floor for a new tenant, the plan was to create open space with flexible, moveable workstations. Providing power and data connections was a challenge because poke-through devices were not an option in this single-floor project. Instead, conduit was run down existing columns, providing an open, industrial look. However, services still needed to be run to the workstations.

The original thought was to use floor boxes, which would have entailed cutting into the concrete—a difficult proposition given the project’s tight timeline of two to three weeks. Instead, H&L Electric explored a surface-mounted solution.

Designed to be relocated or permanently installed where access-through floors and ceilings are not an option, overfloor raceway provides four channels of capacity and access to a wide range of power, communications and A/V connectivity. The overfloor raceway system attaches directly to the floor covering, including carpet. It also is fully compliant with the Americans with Disabilities Act.

Formerly, the Biltmore Hotel—across from New York’s Grand Central Station—the property at 335 Madison Avenue has been converted to office space.

Howard Weiss, H&L Electric’s vice president, supported the overfloor raceway system concept for integrating communications into the project but needed a layout showing how the system would work from conduit entry to quad services for the workstations. The Legrand engineering department devised a layout that could be replicated across the space. Because of the density of workstations, the layout required a custom internal barrier to maintain separation of power and low-voltage services.

Working on newly installed carpet, the H+L Electric team completed the installation of approximately 1,000 feet of OFR raceway and 234 boxes within a three-week deadline.

“It has a low profile that isn’t obtrusive, yet everything is very accessible. Plus, ADA compliance is very important,” Weiss notes. “The installation went very well. There was a learning curve because we had never used the product before, but Legrand was very helpful to us.”