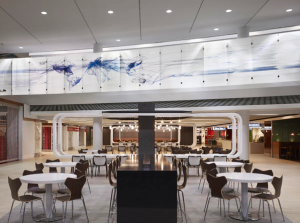 With a goal of providing a hospitality feel to O’Hare’s original design palette of black, white and gray, a custom Oyster Metallic finish was selected for the ceiling baffles in the concession area. The team did not have much ceiling space with which to play. The linear baffle ceiling hides the structure above and makes it feel like a higher ceiling. The above structure was painted black, adding to the height illusion.

More than 4,100 square feet of metal baffles was installed in odd shapes and curves. “The ceiling’s non-standard shapes take their cues from the floor pattern and the millwork,” explains John Kolb, IIDA, LEED AP, Epstein’s associate vice president. “They all sort of mimic each other. Appearance and cost also were considered in the baffles’ spacing.”

In addition to the baffles, Ornelas Construction installed 1,200 square feet of ceiling systems and 300 linear feet of engineered perimeter trim. This open plenum masking system is positioned above the TSA Checkpoint and also surrounds the concession area’s ceiling baffles. To support the perception of a high ceiling, the panels are painted black and blend with the black perimeter trim.

Working onsite, the contractor installed the perimeter trim and assembled U-shaped blades into 6- by 6-inch cells to form 2- by 4-foot panels, which are installed into a 9/16-inch ceiling suspension. The suspension and panels blend to provide a continuous open-cell ceiling appearance, as well as easy access to the HVAC, security and other systems above. The metal baffles, panels and trim, which contain no organic compounds to support mold and microbial growth, contain 100 percent recycled aluminum content and are 100 percent locally recyclable.

Westfield Concession Management oversees concessions at Terminal 5 and guided the terminal’s transformation and expansion from 15,000 to 26,000 square feet. The group and its tenant partners are investing more than $26 million into the terminal’s redevelopment.

Westfield selected Epstein’s interior design and structural engineering team for the project. “Terminal 5 was designed 21 years ago by Perkins+Will,” Kolb notes. “Its modern, clean design is recognized and appreciated. We did not want this to feel like a renovation that didn’t consider the existing architecture. Instead, we wanted to adhere to it but make it better. We wanted to take the vocabulary of the original building and continue it through the mezzanine renovation and expansion.”

Epstein’s scope of work included base building improvements and modifications required to prepare the new and reconfigured concession spaces, as well as redeveloped common areas and a new TSA Checkpoint. Performance considerations for the terminal’s ceilings included easy installation and maintenance; accessibility to lighting, HVAC and security systems; and compliance with the Chicago Department of Aviation’s Sustainable Airport Manual.

Terminal 5 operated throughout the construction, challenging the contracting team to minimize disruptions with a carefully choreographed building sequence. The ceiling panel distributor supported this with phased material deliveries. The final details of the concession area’s interior build-out were completed in First Quarter 2014.

“The reconfigured Terminal 5 raises the bar for airport concessions programs in Chicago and across the country,” concludes Chicago Department of Aviation’s Commissioner Rosemarie S. Andolino.

WaterFurnace to Be Acquired by NIBE Industrier AB of Sweden