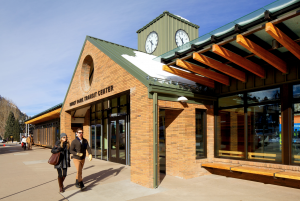 The primary goal of the renovation was to maintain the historic and familiar roof arrangement of the original 1980s transit center.

Built more than 30 years ago, Rubey Park Transit Center has been modernized with the incorporation of elZinc architectural zinc material, which was chosen to help maintain the historic form of the building. About 8,900 square feet of 0.8-millimeter elZinc rainbow green was fabricated into double lock Standing Seam Panels cladding the roof and faccade of Rubey Park. Gilbert Sanchez, principal-in-charge and architect with Studio B, says the standing-seam panels were selected in part for their visual connection to the original roof, durability and low maintenance.

“The zinc panels reflect the original and familiar roof form while successfully integrating with the new additions and modern appearance of the rejuvenated facility,” Sanchez says.

The primary goal of the renovation was to maintain the historic and familiar roof arrangement of the original 1980s transit center.

“There’s an identity about Rubey Park that people have in their minds, so we wanted to build on and enhance that,” Sanchez explains. “We’ve tried to retain some of the key elements of the existing building and update it so that it functions well, it’s a safe place to be, and people like coming in and out.”

To relieve overcrowded bus parking and increased number of bus riders, the restoration of Rubey Park Transit Center included the addition of two buildings on either side of the original center, improving passenger and pedestrian amenities, and enhancements to transit staging and operations.