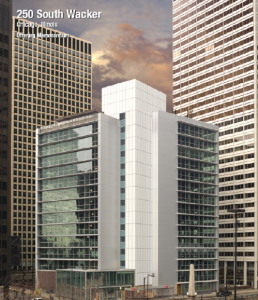 250 S. Wacker in Chicago is a multi-tenant 15-story office tower with retail space on the first floor.

250 S. Wacker in Chicago is a multi-tenant 15-story office tower with retail space on the first floor. The first and top floors had dedicated HVAC systems separate from the system serving the second through 14th floors. These intermediate floors had a floor-mounted induction perimeter system and a constant volume-variable temperature interior system. Each of the floors had approximately 14,300 square feet of rentable floor area (215,000 square feet total).

The building was undergoing a major renovation when DADANCO met the developer, RCN Associates in Chicago in the late fall of 2006. At that time they had removed the building’s exterior walls and glass and had gutted the building down to the concrete. The developer concluded that the existing induction units and enclosures would have to be replaced as they were at the end of their useful life, and they had requested a quotation for replacement units. 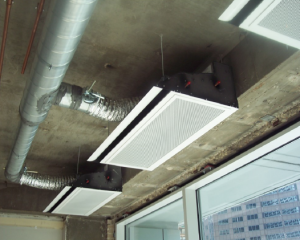 The heat losses along the perimeter were reduced to less than 200 Btuh/lineal foot, which made possible the option of distributing the heat from the ceiling overhead.

The developer was changing the building’s exterior envelope to 100 percent E-glass, which significantly reduced the building’s heating and cooling loads. The heat losses along the perimeter were reduced to less than 200 Btuh/lineal foot, which made possible the option of distributing the heat from the ceiling overhead. Also, there was sufficient room in the ceilings for ceiling-mounted units.

While DADANCO provided a quotation for floor-mounted induction units, the firm suggested that a ceiling-mounted active chilled beam solution would be far better as follows: 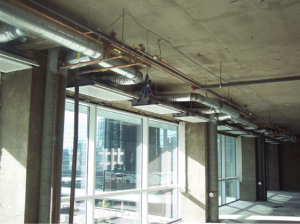 By the spring of 2007 the developer had decided to proceed with DADANCO’s suggested solution and a purchase order was issued for (635) ACB50 active chilled beams.

Soon thereafter the original developer sold the building to a new developer, AEW Capital Management in Boston. AEW Capital and their leasing agent, CB Richards Ellis, were not familiar with active chilled beams (the current perimeter system of choice in Chicago is fan-powered VAV).

AEW wanted to learn about the active chilled beam system before they finalized the purchase of the building and a meeting was held to review the system and its benefits. Once AEW had developed a level of comfort through this meeting, their representatives were concerned about developing that same level of comfort with their leasing agents and asked if DADANCO could provide an analysis comparing the use of active chilled beams and fan-powered VAV perimeter systems for this project. An energy consumption analysis was prepared and is summarized in the table below. (The active chilled beam system could use the existing vertical duct risers, while the fan-powered VAV system would have required much larger risers. The costs and logistics of this change for the VAV system were ignored for the purposes of this analysis, and only operating costs were compared).

In the photos, note the capped take-offs on the risers that had served the floor-mounted induction units. New takeoffs were made off the vertical risers at the ceiling to serve the active chilled beams and the secondary water piping was also relocated from the floor to the ceiling. On the first photo, note that a primary air manual balancing damper was installed upstream of each active chilled beam for commissioning purposes. 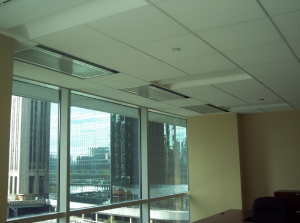 To this point there had been no consideration about making 250 S. Wacker a “green” building, but as the project progressed AEW began thinking along these lines. In their proposals to prospective tenants, AEW’s leasing agents began promoting the building as a green building. AEW is now pursuing LEED certification for this building

The active chilled beam system is now installed and operating. A number of developers, architects and engineers have visited the site and on one visit the outdoor conditions were —12 F. DADANCO was pleased to observe that it was still very comfortable sitting right next to the window with not a hint of a downdraft.

The interior system in the building will ultimately be converted to a single duct VAV system. This is within the scope of tenant improvements and this work is being deferred until the building is leased. One additional suggestion DADANCO has made is to consider the use of lower primary air temperatures (50 F as compared to the more conventional 55 F) to further reduce the fan power in the building. The primary air would be delivered to the zones through Inffuser induction diffusers. The Inffusers induce room air into the primary air before the mixed supply air is discharged into the room. In this manner the primary air is tempered upward to about 60-65 F and the supply air quantity and air movement within the zones is effectively doubled. A decision on this suggestion will not be made until the building is leased.