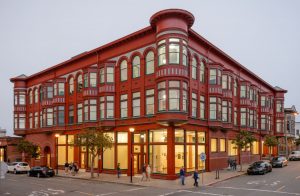 The Carson Block Building project proved to be an opportunity to educate craftspeople about historic preservation, exchange knowledge about construction techniques and discover forgotten local lore.

Large-scale historic preservation and retrofit projects are big enough challenges already, but what happens when the building is located in an isolated area with few supplier options and limited skilled trades? On the bright side, as seen with the recently reborn Carson Block Building in Eureka, Calif., it becomes an opportunity to educate emerging craftspeople about historic preservation, exchange knowledge about time-honored construction techniques and discover forgotten local lore. Even better, it can create a showplace of excellence in design and building, as well as a gleaming new, mixed-use magnet for businesses, visitors and area residents.

First, some background is in order. Eureka, the seat of Humboldt County and a center of action during the Gold Rush in Northern California (and the more recent boom in legalized marijuana farming), is a big town of about 27,000 on Humboldt Bay and surrounded by great natural beauty. Its iconic Carson Block Building dates to 1892 when redwood lumber baron William Carson commissioned architect Samuel Newsom to create a big, bright-red architectural centerpiece to help transform Eureka into a more cosmopolitan city and serious center for commerce. It included the Ingomar Theater, an 837-seat venue among the most ornate of its day on the West Coast.

Prominently located in Eureka’s historic downtown, the stunning 3-story structure offers exemplary lessons in 19th-century building methods using redwood timbers, ideal for the original occupant, the Dolbeer and Carson Lumber Company. By 1991, the building had been included as a contributor to the National Register of Historic Places-listed area, the Eureka Old Town Historic District—but not soon enough: In the intervening decades, including some hard times for Humboldt’s county seat, well-meaning building owners had “modernized” the façades by stripping away brick archways, decorative carved wood trim and ornate relief panels. The tall, first-floor storefront was almost entirely removed and redesigned and, most notably, the bright-red street-facing façades were covered over with tan cement plaster. It got modern, or more accurately moderne, to no benefit for the city. Worse yet, in 1958 the Carson Block’s iconic corner turret was removed to make way for a corner-blade sign.

As experts in preservation and architectural history, the firm Page & Turnbull, which has offices in Los Angeles, Sacramento and San Francisco, saw an opportunity to revive this legendary, 50,000-square-foot masterpiece for the current owner, the Northern California Indian Development Council (NCIDC), a Eureka-based non-profit that specializes in administering grants to Native American tribes in California.

And that’s what happened: In 2010, a planner from NCIDC called Page & Turnbull asking for a cursory façade study to see if restoring the exterior would be possible. That work supported the group’s receiving a grant of more than $1 million, called a California Cultural and Historical Endowment. This relatively small study was followed by a historic structure report—often the first step toward a historic-preservation project and a key to lining up funding and historic tax incentives. 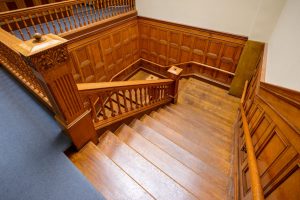 Eventually NCIDC got its startup nut, a Community Development Block Grant, which paired with other funding sources, including a 20 percent Federal Historic Preservation Tax Credit, that covered the majority of the rehabilitation costs. Then, as the project team was inspecting the building and drafting its report—Eureka!—the original 19th-century redwood façade and stunning Richardsonian Romanesque architectural fabric were found under the layer of cement plaster cladding.

As a last step, according to Kathie Hamilton-Gentry, the former senior planner with NCIDC, the architecture team reviewed seismic and HVAC design for conformance with the Secretary of the Interior’s “Standards for the Treatment of Historic Properties, Standards for Rehabilitation”, a prerequisite for getting federal historic tax credits.

Working with Gentry and then-executive director Terry Coltra of NCIDC, Page & Turnbull teamed with executive architect Joe Monteadora, AIA, LEED AP BD+C, of John Sergio Fisher & Associates in San Francisco, a firm working with NCIDC since the 1980s on potentially restoring the Ingomar Theater, which had been closed in 1923 and split into two stories in 1958. Basic problems with the building, however—notably damage from the 2010 Eureka earthquake and a leaky roof—took precedence over the return of the theater, leading to a holistic rehabilitation of the entire building.

With the general contractor Pacific Builders, Arcata, Calif., the team had the opportunity to revive the storied landmark and bring it to modern seismic and accessibility standards. The first phase of work included adding a new standing-seam metal roof to match the original, which was followed by a campaign of major structural upgrades and the meticulous rehabilitation of the building’s two primary façades, once meeting at the memorable turreted corner.

A key to the façade rehabilitation was rebuilding that southwest-facing turret—with local materials matching the original—and the careful removal of nearly 100-year-old cement plaster concealing hefty slabs of old-growth redwood underneath. Historic-preservation contractors treated the damaged redwood to withstand the harsh marine conditions in Eureka, located a few blocks from Arcata Bay and Humboldt Bay on the Pacific Ocean, not far from California’s westernmost point. Treatment included removing damaged wood, consolidating and patching wood in-kind with locally sourced old-growth redwood. Additionally, building features that had been removed or damaged beyond repair, such as pebble-dash stucco, wood trim pieces, and decorative terra-cotta panels, were replaced.

Using research and reviving time-honored crafts, the team committed to building the turret and other building elements with original means or with the best possible facsimiles. (As an example, cast stone provided better performance than heavily damaged terra-cotta pieces used in the original.) In addition, Page & Turnbull encouraged reviving the original arched entrances to the Ingomar Theater and a first-floor bank, which had been reconfigured in the 1950s when the theater was removed. Contractors reconstructed the exterior entryway arches using custom brick and cast stone to match the original. The rebuilt arches now serve as storefront, as well as fire-stair egress. Upstairs, the former theater serves as a large meeting and co-working space.

Wood Screw Is Now Available in Red for Use with Redwood

Sherwin-Williams Initiative Aims to Ease the Shortage of Professional Painters