retrofit: What obstacles stand in the way of completely eliminating waste from our manufacturing and consumer streams, and what are the paths to overcoming them? 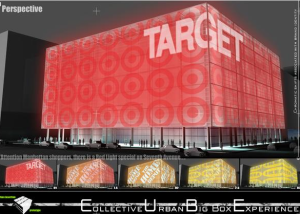 This RTKL Associates’ concept for big-box retailers is designed with the inevitable death of the big box in mind. The entire
building can be recycled by reprogramming the façade and modifying the interior. IMAGE: RTKL.com

Taylor: The contractors put an exorbitant cost, whether you’re doing a LEED project or not, on anything but a standard single Dumpster and taking it out during midnight hours where there is minimum impact on the building as possible. They are often encouraged to approach it that way by the building owners. As such, the interiors, particularly in large buildings, have been very problematic. The best practice is getting an interiors’ contractor who [recycles] from the beginning rather than trying to turn what is often a fast and very cost-restricted project into a lesson.

O’Grady: Back in 2005, we did a proposal for a project for a developer in New York who wanted to do an urban, big-box development. We called it the “CUBE”, which was the Collective, Urban, Big Box Experience. There was a Home Depot, Target and IKEA stacked vertically on this site. The façade was a very simple box and we digitized it, so the building itself during its lifespan as a commercial building or as a retail building could implement the identity of those different retailers. Then, over time, as those retailers moved in and out, the façade could basically be programmed to take on whatever sort of character you wanted. Those are the things that are necessary to really get to that idea of zero waste and have a building that can really take on other functions when its original function is obsolete.

retrofit: What can the design and construction community do to help eliminate waste altogether?

Owens: I think the design intention needs to be much more focused on thinking with the end in mind—thinking through the entire life cycle of the building in a more systemic and holistic way.

Taylor: Obviously, the first and foremost thing you should do is use less [materials]. Why put carpet on a perfectly flat concrete floor you could stain and never have to lift that carpet up again? Why do we put vinyl wall covering on top of drywall? Why are we … even putting a ceiling on? You already have the structural ceiling. Less stuff to begin with, which does not appear to be [popular] yet.

O’Grady: RTKL is involved in a program called “Zero Landfill” where we take a lot of our leftover material samples and other products that are in the office and we divert those, keeping them out of landfills. I think last year alone the program here in Dallas diverted 40,000 pounds of industry waste from the landfill. And the Dallas RTKL office had about 4,000 of those pounds. [Editor’s Note: Zero Landfill is a program of Green, Ohio-based BeeDance, which develops interactive biomimetic products and services governed by nine lessons of the honeybee.]

It doesn’t seem like a lot when we’re dealing with it on a day-to-day basis—the material samples—but it all really adds up, especially when you’re talking about bigger offices, like ours. There are things you can do on a day-to-day basis, in addition to the overall responsibility that we have in designing.