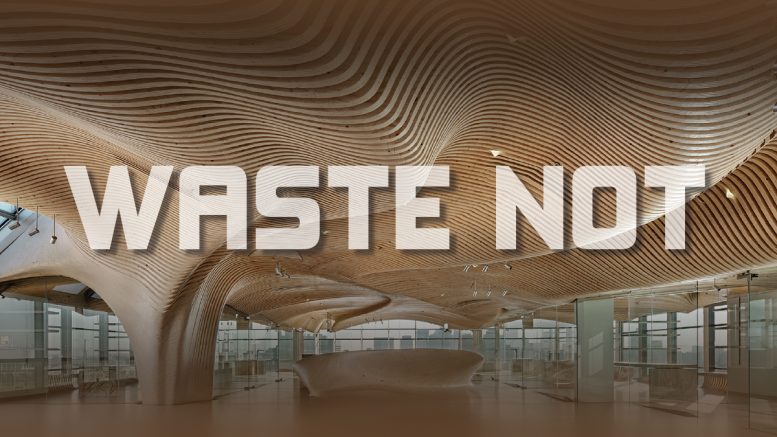 As we think about sustainability and the built environment’s contributions to the fight against climate change, there are many competing priorities and factors to consider. Of course, carbon looms large in the conversation right now. While that is of great importance, it’s also vital to not lose sight of other elements of sustainability, including the landfilling of waste. According to data from the EPA, in 2018, the U.S. generated 292.4 million tons of municipal solid waste. In that same year, the construction industry generated more than twice that, approximately 600 million tons.

It’s clear that part of the path to a more sustainable future must include moving away from the culture of disposability that has been established in the past century. We need to rethink the idea of waste, reuse more materials and landfill less.

No Room in the Dump

The sad fact is that we have relied on landfills as the first option for such a long time that landfills are reaching capacity. In many parts of the country, the cost of landfilling is rising and budget pressures are starting to drive projects toward higher levels of waste diversion.

“We’re seeing landfills fill up and transfer stations close down because they don’t meet the state’s requirements for recycling and diversion, so that means waste haulers are waiting longer in lines at the transfer stations” says Laurel Christensen, AIA, WELL AP, sustainable design leader at Dyer Brown in Boston. “That additional time costs money, and that cost is going back to the client. Not only from a sustainability perspective, but functionally looking at the budget of the project, I think we’re nearing a turning point where waste diversion is going to become the norm. Not just for sustainability reasons but for capacity reasons.”

There has long been an emphasis on the idea of recycling as an alternative to landfills, but there have been many practical and technological barriers to overcome. As an example, some plastics are recyclable, but many are not. However, there recently have been some exciting advances that may change that.

“The issue with recycling is that only the valuable stuff and the good plastics are recycled—things like soda and shampoo bottles,” explains Sebastian Sajoux, founder and CEO of Arqlite, a recycling technology company based in Santa Ana, Calif. “Polypropylene and polyethylene are the most recycled materials. All the other streams end up being mixed plastics that have no value. Sorting and reprocessing it is more expensive than just burying it.”

Sajoux’s firm has developed technology to find utility for those mixed plastics and keep as much of it as possible out of landfills.

“The other stream we have is flexible packaging, like chip bags and energy bar wrappers,” Sajoux says. “We are able to take those rejected plastics and use them as raw material for a product called Smart Gravel. It’s much lighter than mineral gravel, doesn’t generate dust and is a good insulator. There are lots of companies like ours trying to tackle pollution, but the real solution is the development and use of sustainable materials. I believe people are becoming more responsible and want to purchase things that are recyclable.”

Among architects, there is a sense of responsibility to do the best possible work for the environment and, when it comes to materials, there is also an added layer that comes from respect for the materials themselves.

“I was introduced to the reuse conversation because of a beautiful interiors project that had been done about 10 years ago in Cambridge [Mass.],” Christensen recalls. “It was a gorgeous space and was conceived with low-embodied carbon and waste diversion in mind, but renovations by subsequent tenants had chopped away bits and pieces of it, so what was remaining was far from the original design. It was custom and unique, but our task was simply to demolish it and white box the space for the next tenant. I thought, there has to be some way to save this.”

This set Christensen on a path of learning more about the salvaging and repurposing of materials. It felt like a travesty to send custom, crafted wood interior finishes to a landfill.

“We couldn’t use that material on any of our projects at that time, but maybe someone else could,” she continues. “This investigation ultimately led us to form a reuse subcommittee within our local Carbon Leadership Forum chapter to foster conversations around reuse in the Boston market. We have a lot of participation from contractors, owners, architects and designers committed to reducing embodied carbon through reuse. We now are more likely to see drawings that require a certain percentage of diversion and more designers and owners starting to prioritize products and materials from manufacturers that offer take-back programs for their materials to be recycled and reused.”

Beyond the sustainability benefits, salvaged and reused material can really add to the aesthetic of a space, in terms of pure looks and sometimes also for bringing a richness of history to a design. An entire industry has grown up around saving and repurposing items of beauty from buildings that might otherwise end up in a landfill. That work requires a keen eye and skilled touch.

“Unlike demolition, architectural deconstruction requires finesse instead of sheer force. Reusable items, such as marble mantels, crystal chandeliers, tin ceilings, large mirrors and intricate cabinetry can lose their value if they are damaged during the salvage process,” explains Jim DiGiacoma, store manager with Olde Good Things, an architectural salvage company with three brick-and-mortar retail locations in New York, one in Los Angeles and a warehouse in Scranton, Pa. “While some items are sold just as found when they were salvaged from renovation sites, others have been modified for home use. There are Paris street lamps reconfigured as large pendant lamps to hang above kitchen islands or in loft apartments and window frames from historical buildings, like New York City’s Domino sugar factory or Flatiron Building, now fitted with mirrors to be hung on walls.”

There also can be significant cost savings when projects are able to reuse materials rather than buying new. For some builders, this can become central to their operating model.

“We were inspired by necessity, and necessity inspires ingenuity,” says Larry Pierce, founder and owner of LCP Group in Vestal, N.Y. “We try to incorporate building materials we salvage into other building projects, rather than putting it in landfills. The first time we did it, we tore down a 20,000-square-foot furniture store and I was taking out the steel I-beams and they were about $200 per piece for us to scrap. I called a local mill and found that buying new ones would be $1,800 to $2,000 per piece. At the same time, we were trying to build a log timber-frame home and the timber-frame trusses were about $20,000, so we just used the I-beams. The value-add was there. It became a mindset for us: Let’s not throw this stuff out; let’s try to reuse it.”

GCCA Unlocks the Benefits of Cool Roofs in Online Feature