The Flood Building is a San Francisco landmark built in 1904 and located at the Powell Street cable-car turnaround. In addition to being structurally resilient—it was one of the few buildings to survive the 1906 earthquake and subsequent fire—the Flood Building has taken steps to continuously improve energy performance as the general uses and tenants have evolved with the city around it. In fact, by 2012, the building boasted an Energy Star rating that signified it was more energy efficient than 99 percent of similar buildings.

Although San Francisco-based property-management firm Wilson Meany was skeptical substantial savings could be realized when the building was already performing at a high level, the firm elected to move forward with a full-building evaluation in early 2012 not only because Wilson Meany believed it was the right thing to do, but also because there was no financial risk. 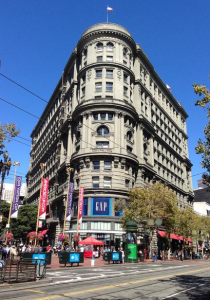 San Francisco’s Flood Building, which was built in 1904, has taken steps to continuously improve energy performance as the general uses and tenants have evolved with the city around it.

Wilson Meany had previously completed a successful energy project with Carbon Lighthouse, San Francisco, and contracted with the environmental firm again on the Flood Building. Carbon Lighthouse provides turnkey projects meeting specified financial criteria using data-driven energy-efficiency solutions, renewable energy and carbon allowances to provide results that are profitable and carbon-neutral. Carbon Lighthouse guarantees a minimum project outcome (15-plus percent internal rate of return or cash-flow positive from day one). If the firm is unable to deliver on the expected outcome, there is no fee for the first phase of the project.

Engineering and Analysis: Phase One

Wilson Meany and the building owner make an effort to save tenants money on their utility bills and modernize building operations as much as possible while preserving the integrity of the historic space. At 12 stories and 294,000 square feet, the Flood Building hosts 350 commercial office and retail tenants, including the flagship store for Fortune 500 company The Gap, as well as Urban Outfitters and Anthropologie.

When Carbon Lighthouse began its work, the Flood Building had already undergone multiple rounds of efficiency upgrades, including improvements to its lighting and HVAC systems that contributed to the building’s Energy Star rating. Carbon Lighthouse was challenged to identify and implement additional efficiency opportunities.

Following a preliminary site walk with building management to assess the primary uses of energy, Carbon Lighthouse engineers were ready to start Phase One of the project. Engineers began by deploying passive, temporary monitoring equipment throughout the building to gather 350,000 data points on circuit-level electrical flow, temperature and humidity for a six-week period. The datasets then were analyzed for ways to improve environmental performance and optimize existing equipment. Using 12 years of weather satellite data, as well as highly granular humidity, temperature and electrical data taken from the building, Carbon Lighthouse’s modeling accurately predicted the energy use of each individual circuit of the building and used that as the basis for calculating energy savings and verifying those savings during and after project implementation.

The top 10 floors of the Flood Building have operable windows and natural ventilation to take advantage of San Francisco’s moderate climate. Therefore, focus was placed on the ground-level operations and retail spaces. Although the ground level uses city steam for heat and water source heat pumps for cooling–one of the most efficient ways for large commercial buildings to run cooling systems–Carbon Lighthouse saw opportunity to improve the system further.