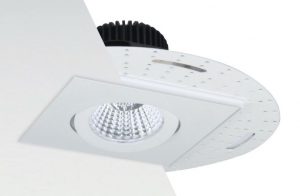 The Flush Mount model features a visible round or square trim flange that installs flush with the ceiling.

Iolite features a LED core module that is compatible with dedicated housings and offers dimming and voltage options. The patent pending design allows the driver to be changed from below the ceiling.

The Iolite Trimless model has no exposed trim flange and does not extend below the ceiling plane, presenting a contemporary architectural appearance. It requires only three parts, housing, mud ring and trim. The Trimless is offered in 2- and 4-inch apertures in a deep cone or an adjustable reflector and produces 800 lumens.

The Flush Mount model features a visible round or square trim flange that installs flush with the ceiling. The fixture only requires three parts, housing, flush-mount mud ring and Iolite trim/module. It is available in a 1-inch aperture with 600 lumens and 2- and 4-inch apertures with 800 lumens.