Upgrades restore functionality to building once condemned as dangerous

Like so many of a building’s systems, it is often only when one breaks down that you notice. But when a building’s HVAC system malfunctions, it’s merely inconvenient. When a building’s earthquake resistance system fails, it’s catastrophic. Put simply, failure is not an option when it comes to seismic retrofitting.

The potential for structural failure caused city officials in Vancouver, Wash., to abandon several downtown buildings and put them up for sale, seemingly spelling the end of their useful lives. But a major retrofit that included significant seismic upgrades brought new life to the old buildings, repeating a story that is taking place in many of this country’s seismically active areas.

As the recent earthquakes in Haiti and Chile illustrate, utter and complete devastation lurks under the surface of the Earth and strikes without warning. The two quakes demonstrate the importance of constructing buildings to meet high seismic resistance standards. In Chile, an earthquake measuring 8.8 on the Richter Scale — the seventh strongest ever recorded — caused far less structural damage relative to the one in Haiti, which saw its capital city literally leveled by a 7.0 quake, some 500 times less powerful. A critical factor in the disparity of the damage caused is that earthquake resistance standards are much higher in the seismically active Chile. In the United States, seismic retrofitting is growing alongside the rest of the retrofit industry, and the example found in Vancouver shows that seismic upgrades can fit seamlessly into the overall retrofitting of older buildings.

The Citizens Service Building and the adjacent Data Center were owned by the City of Vancouver and occupied by numerous city departments, most recently — and ironically — by the planning and building departments. The site consisted of a 1967 single-story heavy timber building originally designed as a branch bank. It was attached to a 1970 four-story office building with a basement. The four-story building was constructed of both pre-cast and cast-in-place elements and relied upon concrete shear walls to resist seismic loads.

The city commissioned Tier 1 and 2 Earthquake Risk Evaluation studies.  These were completed based on American Society of Civil Engineers ASCE 31-03, the current state-of-the-art structural standard for evaluating existing facilities for seismic vulnerabilities.  The tiers of the ASCE 31 evaluation address the performance of the structural and non-structural elements of an existing structure.

“When retrofitting an existing building to code, the performance level is life safety,” said Dave Roggenkamp, the structural engineer contracted for the project. “Tier 1 is a basic check on the presence of seismic load paths and a review of conservative ‘demand on’ versus ‘capacity of’ the seismic elements. 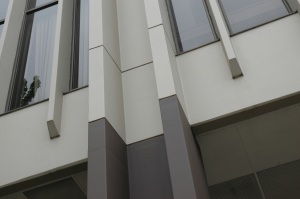 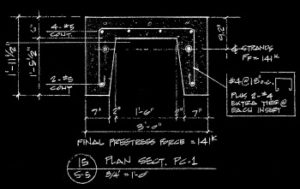 The C-shaped columns depicted above beared the gravitational load of the building but were found to be structurally deficient because their shape rendered them non-ductile.

Alarmingly, according to the evaluation “the ability of … the structure to resist the forces of a major earthquake is very doubtful.” The primary structural problem with the building was its unusual C-shaped columns. Due to the C-shape, the columns had the potential to shatter, possibly causing the building to lose vertical support resulting in partial collapse in a major seismic event or leading to floors “pancaking” upon one another. A critical factor in a building’s ability to resist lateral loads, or forces acting on its sides, is the use of ductile structural support materials that will bend but not break. The C-shaped columns were found to be non-ductile, or brittle.

The building was classified as a “dangerous building” because of two main seismic deficiencies: the non-ductile columns that if failed during a seismic event would cause a loss of gravity support for the floors and a lack of adequate diaphragm connection to the shear walls.

The “dangerous building” designation is deemed upon buildings that have conditions that “exist to the extent that life, health, property or safety of the public or its occupants are endangered.” Specifically, this building exhibited two instances of having a “supporting part, member or portion less than 66 percent of the strength, as required by law, in the case of a newly constructed building of like area, height and occupancy in the same location.”

The city vacated the building within six months of receiving these findings and put it up for sale.

With more than 25 years of experience, Brett joined EHS Design 15 years ago. A Michigan native, he has worked with clients throughout the country, including Citicorp, IBM, Weyerhaeuser Employees’ Credit Union, Yale School of Medicine and Bank of America Data Center. Brett's hobbies include designing and fabricating “whimsical, sensitive, animated and fun” light fixtures, finding there is “bliss in craft.” He developed this passion while studying in Denmark where he was inspired by many great Danish designers. Brett lives with a vista of Puget Sound with his wife and two young children.

Be the first to comment on "Sizing Up A Seismic Retrofit"