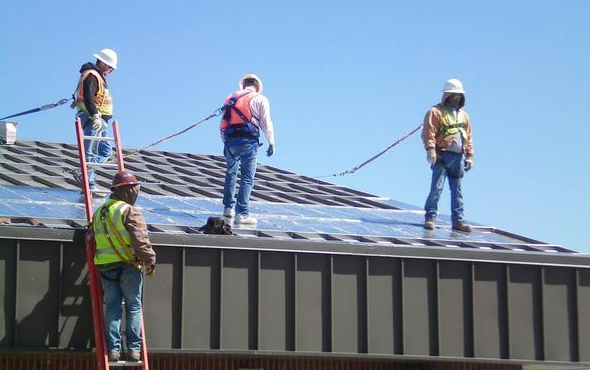 For any type of building, water heating and space heating represent a significant percentage of a building’s energy consumption. Owners of new or retrofit construction projects can reap significant financial savings in a relatively short time by understanding and evaluating the effectiveness of the renewable-energy systems that can produce domestic hot water and space heating. Thoughtful selection and implementation of a renewable-energy system before (and during) construction can often yield high savings and beautiful aesthetics provided through an experienced and competent contractor, as demonstrated on Goodfellow Air Force Base, San Angelo, Texas.

When it comes to effective and environmentally friendly generation of heat, the technologies range from simple passive solar systems to geothermal systems using phase-change materials to more complex and high-efficiency concentrating solar systems that use vacuum tubes and parabolic mirrors. Depending on the project scale, location and building type, solar-thermal production technologies can be mounted
on the ground, attached to roofs and walls, or actually integrated into the building’s wall or roof assembly.

The combined building envelope plus energy technology systems fall into a category defined by the Washington, D.C.-based U.S. Department of Energy as Building Integrated Solar Technologies, or BIST systems. These systems collect the sun’s energy as heat and transfer that energy to the building’s space- and water-heating systems via heat exchangers using nontoxic fluids. The most environmentally friendly heat-transfer fluids being introduced to the market are water and nontoxic bio-glycol made from corn. 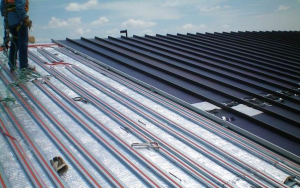 A building-integrated solar-thermal system was installed above the roof’s radiant barrier and below its new metal roof panels.

Because BIST thermal systems are integrated as part of the building envelope, they are protected from the sun’s damaging ultraviolet rays, making them long-lasting and durable. Being completely concealed by a roof or wall surface, they are architecturally integrated into the building design and practically hidden from view while remaining highly effective as a power source. Building envelopes with architectural integrity, long life and renewable energy have proven to be an attractive combination for the residential, commercial and military building industry, resulting in hundreds of thousands of square feet of installed systems since 2004. These systems have
been rigorously evaluated during the years and have been independently tested by the Florida Solar Energy Center, Cocoa, and certified by the Solar Rating and Certification Corp., Cocoa, Fla.

Now the military is taking a harder look at the effectiveness of BIST systems. As part of a DoD Environmental Security Technology Certification Program (ESTCP) grant, Goodfellow AFB’s 17th Security Forces Squadron completed the installation of a building-integrated solar technology system in conjunction with a retrofitted metal roof. (To learn more about ESTCP, see the first article of this series in the September-October 2012 issue, page 30.) This high-performance retrofit roofing system was implemented to demonstrate that fully commercialized building-integrated solar technology solutions can be readily and effectively deployed to upgrade the 2 billion square feet of DoD building inventory to 21st century energy-efficiency and power-generation standards.

Prompted by the need for a roof replacement, the retrofit system synergistically combines multiple “stacked” technologies to maximize efficiencies and power generation, all as one roof. The retrofit roofing project includes a new metal roof with integrated solar photovoltaic (PV) panels that are cooled by the building-integrated solar-thermal system (increasing PV electricity output while producing hot water), upgraded roof insulation, and a system to collect and reuse rainfall. The concealed solar-thermal system is one of several integrated systems being demonstrated at Goodfellow AFB. Performance will be determined relative to meeting federal efficiency goals, including Executive Order 13423, EPAct 2005 and the Energy Independence and Security Act of 2007.