High-output fixtures at the materials management warehouse were replaced with T5 high-bay fixtures and occupancy sensors.

It’s a well-known fact that commercial buildings are energy hogs. Inefficiencies in the structure and operating systems, as well as misappropriation of space and poor occupant habits, contribute to energy waste.

Realizing it had room for improvement, city of St. Louis administrators embarked on a sustainability mission with partial funding assistance from the Washington, D.C.-based U.S. Energy Department’s Energy Efficiency and Conservation Block Grant Program. EECBG is funded by the American Recovery and Reinvestment Act of 2009 and is modeled after the Community Development Block Grant program administered by the U.S. Department of Housing and Urban Development, Washington. The program is intended to promote, implement and manage energy efficiency and conservation programs and projects designed to reduce fossil-fuel emissions, reduce the total energy use of entities, improve energy efficiency, and create and retain jobs. The grant program empowers communities to make strategic investments to meet the nation’s long-term goals for energy independence and leadership on climate change.

The St. Louis City Hall benefited greatly from the EECBG funds. In addition to upgrading what many consider to be the city’s most prominent building, St. Louis also took action at its airport. Lighting upgrades that yield thousands of dollars in savings per year were the primary initiative. However, they won’t be the city’s only actions toward sustainability. Through a detailed plan, St. Louis intends to continually takes steps to become a more sustainable city overall.

The DOE assigned EECBG funding to St. Louis City Hall, built in 1893 and considered the crown jewel of city buildings, because the prominent structure could benefit from energy upgrades. Before embarking on the retrofit, the city conducted an EECBG-funded energy audit. As part of that, it determined the building is occupied 40 percent of the year; therefore, the city could reduce energy use for the remaining 60 percent when systems require minimal operation. This is achieved through wall- and ceiling-mounted occupancy and vacancy sensors. 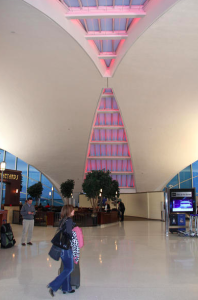 Beyond the energy savings, the lighting retrofits increased the color temperature from 4100 degrees Kelvin to a full-spectrum 5000 degrees Kelvin, which is a whiter light that renders truer colors to human eyes. Retrofitting the light fixtures also involved moving them, so the fixtures maximize desktop/countertop lighting with consideration to avoiding direct lamp glare on people. Light is diffused more efficiently to wash over and brighten side walls, thereby giving occupants the sense of being in a larger space.

The City Hall parking area had 52 metal halide lamp fixtures that were replaced with LED replica luminaires. In addition to delivering better light, the LEDs use only 1.3 kWh, compared to the 7.8 kWh consumed by the previous lighting. Measured in watts, energy savings per fixture is nearly 82 percent. These lights also provide a full-spectrum 5000 degree Kelvin temperature and a color-rendering index of 85.

Based on light meter readings conducted by Kansas City, Mo.-based engineering firm Burns & McDonnell Inc., light distribution was uniformly measured at 1 foot-candle before the retrofit. After the LED luminaires were installed, the light distribution was uniformly measured at 3 foot-candles. The lighting replacements not only improved visibility and provided a sense of security in and around the parking area, but the LED emitters are aimed downward and outward, as opposed to upward, to reduce light pollution. All of the upgrades yielded a 50 percent energy savings. 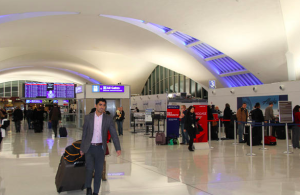 All of its energy upgrades save the airport approximately $100,000 per year.

Air travel contributes to 2 percent of global greenhouse-gas emissions, according to the Intergovernmental Panel on Climate Change, Geneva. Although unable to reduce energy use from the airplanes themselves, St. Louis has taken steps to reduce energy consumption and operating costs at its airport. The Lambert-St. Louis International Airport improvements did not receive EECBG money, but it was able to participate in and receive rebates from the region’s electric utility, St. Louis-based Ameren.

Operations and maintenance upgrades include frequency drives for the cooling tower; chilled water pumps at the West Boiler Plant; continual upgrades for higher efficiency motors used for air handlers, pumps and other mechanical operations; replacing controls for garage ramp heaters to activate only when temperature and moisture permits; and new air handlers with premium efficiency motors controlled by frequency drives at the Field Maintenance Facility. All of the energy upgrades save the airport approximately $100,000 per year.

The city, in fact, is so dedicated to developing its sustainability goals, it formally adopted the City of St. Louis Sustainability Plan in January. The plan, which was developed throughout an 18-month period with $200,000 of the total $3.7 million EECBG grant money, will encourage collaboration in the community to focus on conservation and sustainability. 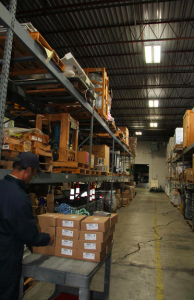 High-output fixtures at the materials management warehouse were replaced with T5 high-bay fixtures and occupancy sensors.

“We were already working hard to advance sustainability in the city, but having a Sustainability Plan will enable us to work collectively with our many partners to be as effective and progressive in the field as possible,” says Francis G. Slay, St. Louis mayor. “This plan will help focus the conversation on sustainability. It is designed to support our goals to improve overall quality of life and to make the city a more desirable place now and in the future.”

The sustainability plan encompasses more than 300 strategies, all focused on what the city has dubbed its “triple bottom line sustainability,” which balances social and economic issues with those of the environment. Proposed strategies toward advancing sustainability include redevelopment of historic homes, commercial properties, underused land and buildings, brownfields and vacant properties; promoting city living; enhancing and increasing transportation options; and collaborating across sectors and markets, in addition to addressing challenges associated with K-12 education reform, public safety and demographic fragmentation.

St. Louis hopes its Sustainability Plan will serve as a guide and framework for effecting greater collaboration, achieving improved results and realizing goals to make the city a better, healthier place to live and work.

Explosion-proof LED Is for Areas where Flammable Chemical Vapors Exist