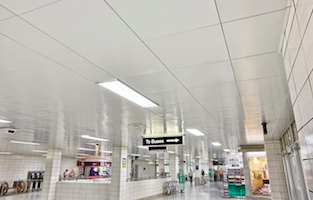 As part of Toronto Transit Commission’s (TTC’s) renovation of Islington Subway Station, Rockfon Planostile Snap-in specialty metal ceiling system met the requirements for performance, appearance, longevity and for ease of installation, which was managed by TTC’s own team. The master specification developed on Islington Station serves as the basis for all ceiling replacement needs in the TTC stations currently scheduled for renovation. 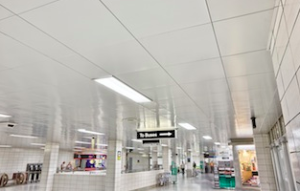 TTC is the third largest public transit system in North America servicing some 4.5 million people in the Greater Toronto Area from nearly 70 stations. Located at 3286 Bloor Street West, at the corner of Islington Avenue, Toronto, Islington Subway Station is housed within a 13,000-square-foot concrete building with underground access to the subway. TTC moves 460 million people annually—about 1.5 million riders every weekday. Of these weekday commuters, approximately 41,000 arrive and depart from Islington Subway Station.

After enduring for decades, Islington station’s ceiling system was ready for a fresh look. Another manufacturer’s linear metal ceiling had been installed during the early 1980s. “It was showing its age, was difficult to remove and re-install, and was difficult to keep clean,” said John Amaral, senior designer with TTC’s plant maintenance department/engineering.

TTC worked in partnership with GO Transit, Mississauga Transit and the city of Toronto to initiate a multi-phased, multi-year construction project to significantly improve Islington Station. In 2009, Islington Station’s old, interior ceiling had been removed, leaving the plenum open and unfinished. In addition to the unkempt appearance, commuters complained about disrepair of lighting and exposed wiring, pigeons roosting, water infiltrating and bad odors permeating the station.

Helping remedy this negative perception and the physical realities, ROCKFON’s district manager for Ontario and Quebec, Isabelle Champagne, CDT, and her colleagues, vice president of sales Steve Noeth and project manager Dave Jahn, were involved from the project’s earliest stages. Together, they offered construction services and technical support to the TTC in development of a master specification.

Jahn explains, “This master spec not only addressed Islington Station, but would serve as the basis for all ceiling replacement needs in the TTC stations scheduled for renovation.” 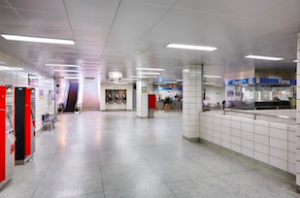 Ease of installation and maintenance was critical to Toronto Transit Commission.

Ceiling specifications were driven by TTC’s engineering, construction and expansion department with priority to performance. Amaral also emphasizes that ease of installation and maintenance was critical, as TTC’s team at Islington would take on these responsibilities themselves.

“Our Rockfon Planostile Snap-in ceiling systems hide the suspension systems, provide very tight joints and offer a high degree of security. The strength of snap-up systems and their metal panels makes them a reliable choice for challenging interior designs like these,” describes Champagne.

The ceiling systems also needed to meet TTC’s requirements for positive and negative air pressure, withstanding a wind load of up to 1.24 kPa without additional bracing or tie-downs. “Due to the fact that the system is designed as a friction fit engagement, it was imperative that the ceiling system could withstand the piston affect air pressures of incoming and departing trains. As such, meeting the air pressure criteria was crucial to its approval for use,” adds Amaral.

TTC’s design criteria also necessitated a strong, yet lightweight material. The Rockfon Planostile Snap-in aluminum panel ceiling system was selected and the tested for compliance. The metal comprising the Rockfon Planostile panels contain 100 percent recycled aluminum content. At the end of the ceiling system’s useful life, it is 100 percent locally recyclable. “It was an ideal choice as it neither accumulates moisture nor supports substances supporting mold or microbial growth,” notes Champagne.

Material choice focused on color and finish continuity with consideration to future replacement needs and visual appearance. “Aesthetically, we were aiming for clean lines and tight joints between the panels to result in a seamless looking ceiling,” says Amaral. The 2- by 2-foot aluminum panels were fabricated with beveled edges and finished in Satin Silver anodize. Following the master specification, a series of mock-ups also were created to ensure that the actual system met TTC’s criteria. 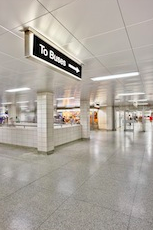 Aesthetically, TTC was aiming for clean lines and tight joints between the panels to result in a seamless looking ceiling.

“We brought the material to TTC’s maintenance crew on-site at Islington,” Jahn remembers. “We met during the night shift to avoid bothering the riders. We showed TTC how the Rockfon Planostile system installed and what it looked like in place. We’d get their feedback and make modifications. Based on this process, the final ceiling system for Islington includes a custom-sized panel and C-channel to integrate the existing light fixtures. We didn’t want TTC’s crew to have to cut anything other than maybe trimming the perimeter edge. The installation team reported it went smoothly, as planned.”

Renovation on Islington Station’s ceiling began in June 2012 and was completed in December. (The product distributor was Arrlin Acoustics.) TTC’s maintenance team installed the specialty metal panels at the station’s concourse level and also above the pedestrian access to the fare booths, the bus platforms and the escalators to the subway platforms.

“They did a great job,” praises Jahn. “It’s a pleasure to work with TTC’s team.”

Champagne agrees, “As soon as the new Rockfon Planostile system was in place, it was like a day and night transformation.”

Amaral also notes, “The sales and technical staff always made themselves available to us from early on when we were developing a new ceiling standard to the various ceiling mock-ups that were installed for testing purposes to the first installation at Islington Station.”