Texas A&M University in College Station is quickly becoming nationally recognized for its energy-management program. The university, which boasts close to 53,000 students, will receive a prestigious international climate award this month for successfully deploying district energy systems to cut emissions and strengthen the local economy. The university also was honored earlier this year with an Energy Star CHP Award for demonstrating considerable reductions of energy consumption and emissions. The awards are a testament to the hard work of the university’s Utilities & Energy Services (UES) department. “Because of my years in facilities management and the energy industry, including two decades in higher ed, I can confidently say we have a state-of-the-art, second-to-none energy-management program,” says Jim Riley, UES’ executive director.

As of the end of August 2013, Riley and the UES team have led an effort to reduce energy consumption per square foot on the university’s 5,200-acre campus, which includes more than 19 million square feet of conditioned space, by 45 percent since 2002. The financial result has been $162 million in cost avoidance; in other words, if the campus still was operating at its 2002 energy-consumption level, Texas A&M would have spent $162 million more on energy during the past 11 years than it spent. 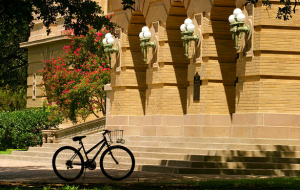 In addition, since 2002, the campus has grown by almost 30 percent—from 18.5 to 24 million gross square feet—while total energy consumption has decreased by more than 28 percent (from 7 to 5 trillion Btu), resulting in the 45 percent reduction in consumption per square foot.

The university’s energy-management program is communicated through the university’s Energy Action Plan (EAP) 2015, which seeks to reduce consumption per square foot by 20 percent from fiscal year 2010 to 2015. EAP 2015 includes key aspects of energy procurement, production,
distribution, metering, monitoring and cost recovery, together with energy stewardship, building system retro-commissioning, HVAC scheduling and precise control of building automation systems—all while ensuring customer needs are met in the most effective way. (Learn more about the 12 initiatives within EAP 2015.)

Texas A&M has been producing its own power on campus since 1893. Four utility plants provide district energy and, in 2011, a combined heat and power (CHP) system replaced a smaller-capacity aging CHP system. Currently, the school generates about two-thirds of its annual power requirement and purchases the remainder from the electric grid.

“The CHP system was an almost $75 million investment that included a number of improvements and upgrades but cost avoids more than $6 million per year,” Riley says. “With a $10 million funding grant the university received from the DOE, the system will pay for itself in less than 10 years. When you can invest in something like CHP that pays for itself while improving reliability and efficiency, as well as helping the environment, it pays big dividends for years to come.”

Although infrastructure requirements at Texas A&M are similar to many other campuses around the nation, the unique way in which utilities and energy services are provided sets Texas A&M apart. “On most campuses, utilities and building automation groups may have great teams, but they typically report to different management, and if both teams are not working toward the same objectives, there’s no way they can be fully effective,” Riley says.

Andersen Corp. Is Energy Star Partner of the Year