Bristol, Va., and Bristol, Tenn., are separated by a state line that runs through their common downtown district. As such, the towns share many attributes, including a claim to fame: In 1998, the U.S. Congress designated Bristol, Tenn., the “Birthplace of Country Music”. In August 2014, the Birthplace of Country Music Museum opened in a former industrial building in Bristol, Va. 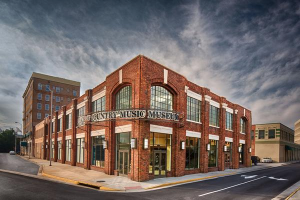 The Birthplace of Country Music Museum was created in a 23,600-square-foot building that originally was constructed as an automotive dealership in 1925. PHOTO: Fresh Air Photo

Through text, artifacts and interactive displays, the museum captures the 1927 Bristol Sessions, which were held by Ralph Peer, a talent scout and record producer with Victor Records. Many believe the Bristol Sessions gave birth to country music as we know it today. In fact, Johnny Cash described the sessions as “the single most important event in the history of country music.”

Creating interactive audiovisual exhibits in a 23,600-square-foot building that was constructed as an automotive dealership in 1925 was no easy feat. But the dedicated architects—Peyton Boyd, FAIA, president of Peyton Boyd Architect PC, Abingdon, Va., and Joseph A. Nicholson, AIA, NCARB, IDSA, principal in charge of studioMUSarx LLC, Philadelphia—and the passionate client—the Birthplace of Country Music Alliance—created a museum experience that makes music lovers who pass through it emotional.

“One thing I’ve learned over my career is that good clients make good projects,” Nicholson notes. “The reason the Birthplace of Country Music Alliance was a good client was they really believe in their story and their project. After they hired us, they let us be the best we could be and at times they pushed us to be better. This project confirmed that when clients realize they have to also speak for the public and artifacts and collection, then you really must have the closest to ideal space I’ve ever come to.”

Although the Birthplace of Country Music Museum is not located on the site of Peer’s temporary 1927 studio, it is close in character to the industrial-type building in which the Bristol Sessions were recorded. The brick and reinforced concrete building is listed on the National Register of Historic Places and had housed a series of retail stores during its history. By 2000, however, it was abandoned and fell into disrepair. In 2004, the owner was persuaded to donate the building to the newly created Birthplace of Country Music Alliance. Although the organization immediately began planning the museum project, it would take years for it to obtain the financing needed. During that time, some unintended guests moved into the structure. 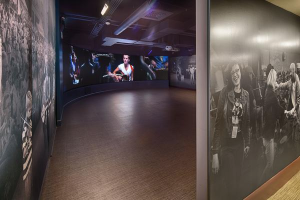 “Before he decided to donate the building, the previous owner had all the windows taken out on the second floor, which left all sorts of opportunities for the weather and birds to come in,” Boyd recalls. “The roof was in terrible condition and so were the doors. Pigeons and people had been making their home in the building. It was in pretty dreadful condition.”

The project relied on historic tax credits from the Virginia Department of Historic Resources, Richmond, and the U.S. National Park Service, Washington, D.C., which obligated the team to bring the building back to its 1920s character. This required some creativity on the part of Boyd and his associate, Michael Haslam, AIA. “The actual brick was not available anymore. Even though we did a lot of research, we couldn’t find anything that even looked like it; the original brick has all sorts of subtle color,” Boyd says. “In the end, we specified a red brick that was somewhat similar in texture and hired a woman who paints faux finishes and has worked on historic buildings before. She actually stained all the new bricks individually to match the old ones. She did a great job.”

Deteriorated mortar was replaced with historically appropriate mortar that matched the original, and exterior concrete was repaired where required.

Boyd and Haslam also researched what was left of the window openings and discovered that four of the windows originally had been arched. The arches were recreated and the first- and second-floor window openings now feature steel windows that replicate the original frame and muntin configuration.