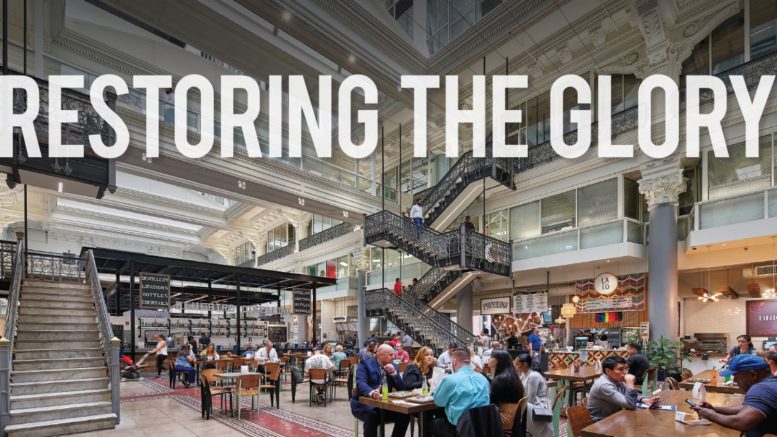 Posted By: Diana Masterson and Robert Lubas May 4, 2020

The Bourse is a 125-year-old building located in the heart of historic Philadelphia. Built in 1895, it is one of the first steel-framed buildings in Philadelphia and was designed by George Wattson Hewitt and William Dempster Hewitt in the Victorian and Renaissance styles popular at the time.

The Bourse was the first purpose-built commodities exchange building in the U.S. The 8-story building’s grand design is befitting of its original use and prominent location. Although it thrived for years as a commodities exchange, it eventually became neglected and suffered repeated renovations that masked its beauty.

Recently, BLT Architects was given the opportunity to undo the damage done to the building and restore its former glory. The team recrafted the original entrances, created a top-tier food hall, revitalized the building’s office spaces and added new amenities while restoring historic elements. This recent renovation has been celebrated by the community and has adopted the motto “Restoring the Glory.”

Philadelphia grain and commodities exporter George E. Bartol returned from Europe in the summer of 1890 with the grand notion of creating a building where merchants could meet, exchange ideas and conduct business. Impressed with the Hamburg Bourse, the stock exchange building in Hamburg, Germany, Bartol introduced his concept to prestigious and influential businessmen in Philadelphia. These men embraced Bartol’s idea and commissioned Hewitt and Hewitt as architects.

The Bourse was built with an open trading floor at the ground level and seven levels of office space above that wrapped a central lightwell open to the sky. The building occupies an entire city block spanning Fifth to Fourth Streets and Ludlow to Ranstead Streets, a prime location for commerce then and attracting tourists visiting Independence Hall and the Liberty Bell today.

When the Great Depression hit, the grandiosity of the Bourse began to fade. By the 1950s and ’60s, the building showed signs of neglect and, in 1971, the stockholders sold the property. New owners capitalized on the building’s proximity to Philadelphia’s tourist attractions and converted the main space to a retail, food and beverage destination. These successive renovations buried the grandeur of the interior, eroding the beauty of the building to suit the new tourist-focused uses. The skylight above the trading floor was moved to roof level, darkening the entirety of inward-facing offices. A mezzanine level was added between the ground floor and the first level of offices, corrupting the original 2-story entrances. The ground floor was converted to a second-rate food court. Large openings to the basement with interconnecting escalators were added to allow access to overflow seating for tourists.

By the time of the Bourse’s recent purchase by MRP Realty, the 358,000-square-foot building was stale, partially occupied and the remaining office spaces were undesirable. The food court served as a buffet for bus-based tour groups and school trips visiting Philadelphia from out of town. Beautiful architectural details were obscured, muddied by dim, surface-mounted incandescent globe lights and a nearly monochrome beige paint.

MRP Realty approached BLT Architects to develop a design vision for the Bourse to use in conjunction with a competitive bid to purchase the building. The design team recognized the opportunity to restore the interiors to their original splendor and create a space with great social impact, engaging the community in a meaningful and productive way. The design vision for the Bourse centered around the restoration of its signature elements, creation of a toptier food hall, revitalizing its office spaces and adding new amenities.

Robert Lubas, AIA, is an architect with BLT Architects and Diana Masterson works with marketing strategies and business development at the firm.