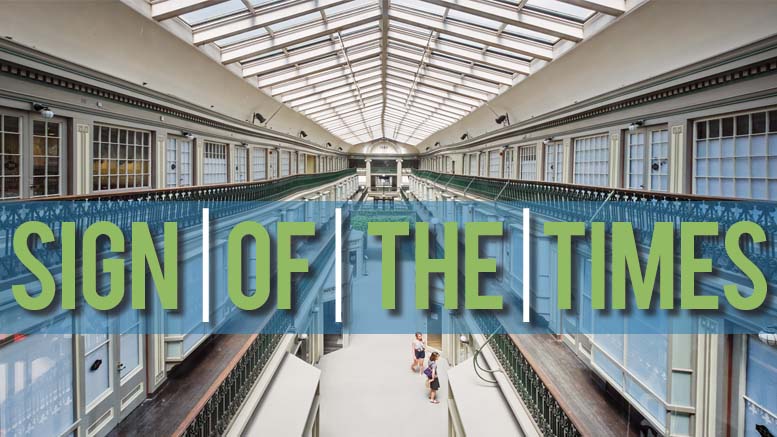 Arcade Providence in Providence, R.I., has been called America’s original shopping mall. Built in 1828, the 3-story structure features Greek Revival columns, granite walls and a glass roof that made customers feel as though they were shopping outdoors. The mall, which extends between Westminster and Weybosset streets, catered to the carriage crowd of the era. “The people who lived on the hill would come down in their carriages and be dropped off at one end of the mall, walk all the way through and come out the other end with the carriage waiting for them there,” explains J. Michael Abbott, principal of Northeast Collaborative Architects LLC, which has offices in Providence and Newport, R.I., as well as Middletown, Conn., and Washington, D.C. “People thought this was amazing at the time; they could do all their shopping under one roof. It had probably 40 stores because the stores were quite small.”

As could be expected of any building that is approaching nearly 200 years of age, the mall went through its share of difficult times and its owners did their best to change with those times while never drastically changing the building’s layout. During the Great Recession, however, Arcade Providence, which then contained a food court on the first level and office space on the upper floors, was forced to close. The nearby Bank of America building had been emptied, which negatively affected Arcade Providence’s food-court business. By the time the mall closed, it had fewer than 10 tenants and was no longer able to pay its bills.

In 2010, Arcade Providence, which became a National Historic Landmark in 1976, was added to the Providence Preservation Society’s 10 Most Endangered Buildings list. Local rumors circulated about the beloved building’s fate. Owner and real-estate developer Evan Granoff kept the mall closed for two and a half years while he brainstormed how to reinvent the building.“We had this wonderful national landmark building that was so important to downtown Providence, and the local people were clamoring to get it open,” Abbott recalls. “Evan and I loved the micro-loft concept for the top two floors; Evan loved the idea of those Japanese capsule hotels. We thought that it would really fly because there are so many students here and so many people that are just starting at their first jobs. They can’t afford the $2,500-a-month apartment.”

The small apartments wouldn’t be quite as diminutive as Japanese capsule hotel rooms but—based on the size of the building’s original retail spaces—would be about the size of a traditional U.S. hotel room. In addition, Granoff visualized first-floor retail spaces catering to the many creative people drawn to Providence by the Rhode Island School of Design. He wanted the startup retail spaces to be affordable for artists and designers to become successful entrepreneurs.

As plans came together, Granoff and Abbott were gambling on an idea that was not mainstream—just as their predecessors did in 1828. Would anyone want to live in 225- to 275-square-foot apartments? Would those in the maker culture be able to succeed as brick-and-mortar retailers? Could Arcade Providence survive another 200 years? Each story of Arcade Providence steps back from the one below it, which creates a tiered form inside that allows light to penetrate all the way to the first floor.

When it was built, Arcade Providence’s two ends were open for ventilation. By the early 1900s, the mall was enclosed at either end and eventually the space was heated and air conditioned. A renovation in the 1980s replaced the glass in the atrium roof and improved the mechanical equipment. When Abbott studied the building, the granite fac?ade was still in great condition; only the joints needed to be retooled. The original one-piece, 20-foot granite columns, which were mined from a quarry 30 miles from the site and delivered via horse and wagon, also were in excellent shape.

“It’s an amazing building because it’s built so fabulously,” Abbott explains. “Each story steps back from the one below it, which creates this tiered form inside that really lets the light come all the way down to the first floor. The light is quite bright; just like being outside.”

Despite the building’s strong bones, there are places where it sags because the structure literally was built on large, flat rocks that were laid in the basement.“Some of the walls actually drooped where some of these flat stones have sunk down into what was kind of marshy land there on the harbor,” Abbott says. The results can be found while walking through the building: handrails move in and out and up and down, and the skylights are wavy. Abbott adds: “Nothing is straight in this building, so that was a challenge. Not a single wall is plumb to another wall, so there was a lot of fitting that had to be done to get everything to fit.”

During the team’s investigation, there were many pleasant discoveries, however. For example, original, interior brick walls were uncovered and have been exposed throughout the building. The team also found shutters that used to close across each of the interior-facing shop windows.“When the shopkeeper was done for the day, he would just fold out his shutters and close up his shop window,” Abbott explains. “They all folded back into these pilaster columns
on either side of the shop window; we just thought they were decorative columns on either side of the shop windows. Suddenly, one day when somebody was cleaning a board and a joint, he discovered a little fold-out closet where all of these shutters were stored. They’re behind every one of the pilasters!”

Project Profiles: Retail and Mixed Use

Be the first to comment on "The Nation’s First Shopping Mall Is Reimagined, Initiating a 21st Century Trend Toward Small Living and Pop-up Retail"