Built in 1913, Phoebe Apperson Hearst Social Hall was the first public building constructed at the conference grounds. It served as a gathering space and directed visitors to their lodgings once they registered in the reception area.

For a century, Asilomar Conference Grounds in Pacific Grove, Calif., has retained its character as a retreat for those seeking inspiration, connection with the natural environment, and the company of friends and colleagues. In 2013, the National Historic Landmark property celebrated its 100th anniversary, which coincided with a series of sensitive renovations of the historic compound. The anniversary was significant because the property was originally designed by famed architect, Julia Morgan, who is best known for her work on Hearst Castle, a national and California historic landmark that was built for newspaper magnate William Randolph Hearst from 1919-47.

Built in 1913, Phoebe Apperson Hearst Social Hall was the first public building constructed at the conference grounds. It served as a gathering space and directed visitors to their lodgings once they registered in the reception area.

The noteworthy renovations to Asilomar Conference Grounds were completed by San Francisco-based Page & Turnbull, an architecture and planning firm with expertise in historic preservation. The team gave complete facelifts to the Phoebe Apperson Hearst Social Hall and the Mary Ann Crocker Dining Hall by hearkening back to Morgan’s original designs for the buildings.

Morgan, the first female architect to be licensed in the state of California, originally designed Asilomar for the Young Women’s Christian Association to serve as a gathering place for members to enjoy the nature and beauty of the Monterey Peninsula. During the course of its 100-year existence, the property expanded and evolved; many new buildings were added in the 1960s to accommodate the site’s growing popularity. The property also features the largest collection of Morgan-designed buildings in the world. Today, the conference grounds host leisure guests and groups of up to 1,000 in historic and newer buildings set among Monterey Pines, steps from the Asilomar Dunes Natural Preserve and Asilomar State Beach.

Asilomar Conference Grounds has an important and storied history, not only for women in architecture, but for all those practicing architecture. Phoenix-based ARAMARK Parks and Destinations is an authorized concession partner of California State Parks. Its goal with the renovations was to honor the property’s rich history while enhancing the guest experience.

The recent completion of each renovation comes after several years of research and development by California State Parks, which has overseen the grounds since 1956, and Page & Turnbull. Because of the historic significance of the buildings, all renovations were required to meet The Secretary of the Interior’s Standards for the Treatment of Historic Properties. To conform to these standards and understand the historic significance of the property, Page & Turnbull consulted with state park historians and architects; studied previous historic structure reports; and conducted archival research at various local repositories, such as the California State Park Archives, Asilomar Maintenance Archives, the Monterey County Public Library and Pacific Grove Heritage Society Archives. The firm also collected and utilized copies of original photographs and existing prints of building drawings.

During the years, the site underwent a series of remodels, additions and renovations. While some of these changes, including those designed by John Carl Warnecke, reinforced the character of its Arts and Crafts architecture embraced by Julia Morgan, subsequent changes were not always sympathetic to the original design intent. One of the design team’s first tasks was to evaluate those changes and find the most sensitive solutions to bring the lost elements back. 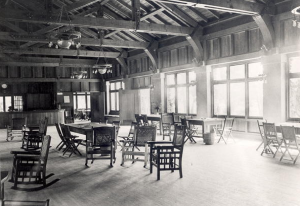 The Phoebe Apperson Social Hall in its original state.

Phoebe Apperson Hearst Social Hall was the first public building built at the conference grounds in 1913. It served as a gathering space and directed visitors to their lodgings once they registered in the reception area. Today, it fulfills the purpose for which it was originally designed. Guests check in at the registration desk and enjoy the impressive open hall with exposed redwood trusses; tongue-and-groove floor-to-ceiling redwood paneling; and large, stone-faced, centrally located fireplace. The remodels of the 1970s and ’80s introduced administrative functions to the hall, filling in the southwest corner with offices, which impacted the symmetry of the original interior layout. This, along with deferred maintenance and the need to add food-service facilities to the grounds, put the 6,000-square-foot social hall on the priority list for rehabilitation and upgrades.

When working on Phoebe Apperson Hearst Social Hall, Page & Turnbull first set about removing alterations that were not agreeable to the original design. The design team then restored the configuration of spaces in the building to be as close as possible to Morgan’s original layout while improving its functionality. Nonhistoric partitions were removed, and the primary south-facing interior wall was reconfigured to recreate openings. Interior wall panels mimic the original design intent. A new café, the Hearst Café, was introduced at the southwest corner, where the original tearoom once was located. Restoring the registration area returned a sense of harmony and order to the social hall.

Up Close and Personal at the Historic Park Inn Hotel