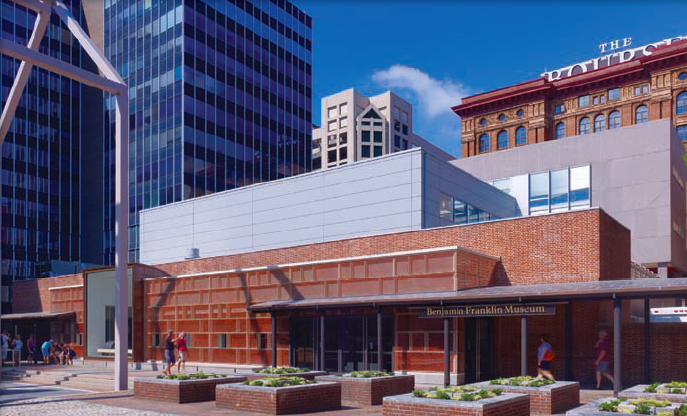 Among the many celebrations that took place during the U.S. bicentennial in 1976, the Washington, D.C.-based National Park Service (NPS) opened a new museum dedicated to the life and legacy of Benjamin Franklin. Originally known as the Franklin Court Museum, the building was designed by Robert Venturi in collaboration with Denise Scott Brown, John Rauch and preservation architect John Milner. The museum was constructed on the site of Franklin’s home in downtown Philadelphia and opened to much fanfare and large crowds of visitors. 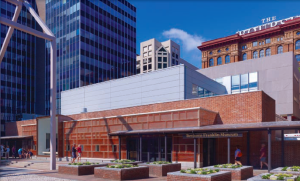 Venturi’s acclaimed court design at the entrance to the museum features iconic “ghost structures”—white steel frames outlining the volumes of Franklin’s home and print shop. The museum itself is largely underground, set around the archeological ruins of the home. The original interior featured a highly sequenced design that facilitated moving large groups of visitors quickly through the exhibit areas.

In recent years, the Franklin Court Museum was showing its age; the building and its exhibits were dated and inefficient. In today’s era of dynamic multimedia displays and interactive museum experiences, the orderly circulation system designed to keep lines of people moving along seemed too confining with limited opportunities to educate and engage visitors of all ages.

Recognizing the need to update the facility and its exhibits, NPS embarked upon an ambitious $24 million modernization. The two-year project was led by the design team of Washington-based Quinn Evans Architects with CassonMann, London, providing exhibit design. Now known as the Benjamin Franklin Museum, the renovated building houses new exhibits inspired by the Benjamin Franklin Tercentenary exhibit, “Benjamin Franklin: In Search of a Better World,” created by curators Remer & Talbott.

A Clear Point of Entry

Creating a more welcoming and functional entrance was among the key objectives for the renovation. NPS sought to establish a more distinctive point of entry and expand space for visitors as they enter the museum at the street level. Quinn Evans Architects enclosed a canopied area along the west side of the court with a glass curtainwall featuring an artful interpretation of the Flemish bond pattern along the brick exterior. A terra-cotta-colored ceramic frit pattern applied to the glass recalls the surface texture of hand-moulded brick. 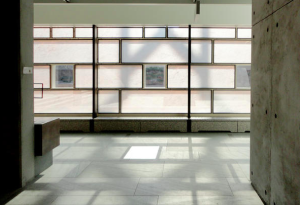 The design of the new
glazed curtainwall animates
the interior with a dramatic
shadow effect.

The new portal echoes the design of the original 1976 canvas awning—a reference to the Philadelphia tradition of open-air market shelters—with a copper-clad canopy. The canopy’s linear composition is relieved by a large window that re-introduces the ghost house to visitors as they return to the surface after experiencing the exhibits below.

Oriented due east, the glass façade is constructed as a “shadow box” with glazing placed at the outer and inner planes of the curtainwall frame. The inner glass is frosted with a ceramic frit mezzotint. “In the afternoon, when the façade is in shadow, the glazing creates a gauzy, translucent scrim,” says Carl Elefante, FAIA, principal-in-charge for Quinn Evans Architects. “In direct sun it glows, animated with shadows cast by the ghost house. The shadows become a playful element within the space.”

Elefante notes the steel ghost structures played a pivotal role in developing the concepts for the renovation design. “Venturi’s ghost structures are still as stunning and surprising today as they were in 1976,” he says. “They reflect a double stroke of genius: Franklin’s home is defined as a memorial yet there is an intellectual honesty about what isn’t there and what we don’t know about this important place. The new glass pavilion—with the fritted glass and largeview window framing the ghost house—responds to these structures.”

Fabric Is Encased in Architectural Glass