John Lund and his wife, Anna, built their 2-story hotel and saloon to provide a “haven where recent arrivals from Sweden could stay and reunite with family and friends or meet future employers”.

In hip college town Boulder, Colo., a perennial favorite on national “best places to live” lists, social responsibility is a way of life. Still, when prospective developers viewed the dilapidated buildings at 1904 Pearl Street west of the city’s Pearl Street Mall—a vibrant pedestrian mall lined with shops, restaurants, buskers and public art—they agreed the neglected property was too far gone to repurpose. The consensus was to scrape and start over.

Enter award-winning Colorado architecture firm Arch11, known for its artful approach to buildings and sites that others deem impossible. Where others saw insurmountable issues, Arch11 saw history worth saving in the late 1800s John Lund Hotel and its adjacent mid-century neighbor. The firm’s skillful adaptive reuse design solution revealed the historical beauty of the former hotel and its unassuming 1950s-era counterpart. The sensitive renewal knits the pair effortlessly into the urban fabric, making this project a model of urban sustainability and redevelopment all with a respectful nod to the past.

In the 1870s, with an influx of Swedish immigrants settling in the Boulder area, John Lund and his wife, Anna, built their 2-story hotel and saloon to provide a “haven where recent arrivals from Sweden could stay and reunite with family and friends or meet future employers”. In the early 20th century, the hotel housed laborers dispatched to work on the Continental Divide’s historic Moffat Tunnel. Boulder was a rough mining town at the time and Lund was shot in a disagreement in 1900. He died in 1907, though his wife operated the hotel until 1915.

The adjacent 1-story commercial storefront started its life in the 1950s as Gil’s Furniture showroom. Subsequent tenants included appliance sales, an office supply shop and a cooperative grocery store. Over time, the two buildings were internally connected while layers of incongruous remodels obscured their historical character. 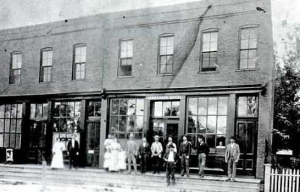 John Lund and his wife, Anna, built their 2-story hotel and saloon to provide a “haven where recent arrivals from Sweden could stay and reunite with family and friends or meet future employers”.

To potential developers, the conjoined buildings presented impossible hurdles, including minimal access to natural light, egress and ADA issues, a failing foundation, uninsulated walls, jerry-rigged structural systems and general disrepair from years of neglect. To add to the project’s complexity, the parcel included a one bedroom miner’s cottage with local Landmark designation. Most redevelopment schemes had unsuccessfully tried to demolish the structures and redevelop the site but were unable to make a pro-forma work as long at the protected structure remained.

Boulder developer and former airline pilot John Reynolds had a different vision for the property. Finding value in each building’s distinctive scale and patina, he saw the potential for an ideal incubator space for Boulder’s creative class. He enlisted Arch11 to revitalize the conjoined buildings in a way that would “intentionally foster community both inside and out, and reflect the authenticity of the place”. But after sitting partially empty for a number of years, the structures required a heroic effort to peel back insensitive alterations and restore historic charm while transforming them into efficient, modern
live-work spaces.

“We were tasked with renewing the building exteriors and creating raw, entrepreneurial office and retail spaces on the ground level and five studio apartments above,” says Arch11 Principal E.J. Meade, who used historical photos of the buildings to inform his design decisions. “Where we could find old parts of the building, we did our best to reveal them, whether it was the brick or a strangely engineered truss.” 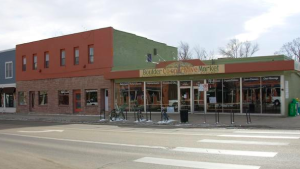 BEFORE: After sitting partially empty for a number of years, the structures required a heroic effort to peel back insensitive alterations and restore historic charm while transforming them into efficient, modern live-work spaces. PHOTO: Reynolds|Lee Development LLC

Noting that the hotel’s original façade appeared to be light wood framing and glass with brick above, Meade removed the offending layers of stucco and fake stone. “We discovered masonry underneath that literally swam along the facade with whole courses getting thinner and thinner until they disappeared.” While a talented local mason repaired the inconsistent brickwork and re-proportioned the openings to receive new windows and doors, the team unearthed a shallow rubble foundation beneath the columns that supported the second floor. The discovery required intensive shoring to excavate the soil below and pour a proper foundation. Once they’d stabilized the structure, Meade and his team employed 21st-century materials to reinterpret the historic façade

Tapping the skills of Reynolds’ metalworker brother Forest Reynolds, founder of Boulder’s Standard Metal Works, Arch11 designed new steel window frames that closely approximated the size and scale of the originals. Low-e, argon-filled glazing units were installed to boost the building’s energy-code compliance. Additionally, subtle updates to the mullion pattern helped to differentiate old from new. The team’s approach to materials was consistent throughout. Instead of recreating the historic exterior wood panels, Meade emulated the original feel of the façade using a high-density stratified wood panel designed specifically for external use and durability.

Sarah Goldblatt, AIA, is based in Denver and writes about all elements of design through the lens of an architect.

Be the first to comment on "Two Dilapidated Structures Are Transformed into a Vibrant Environment for Working and Living in Boulder, Colo."