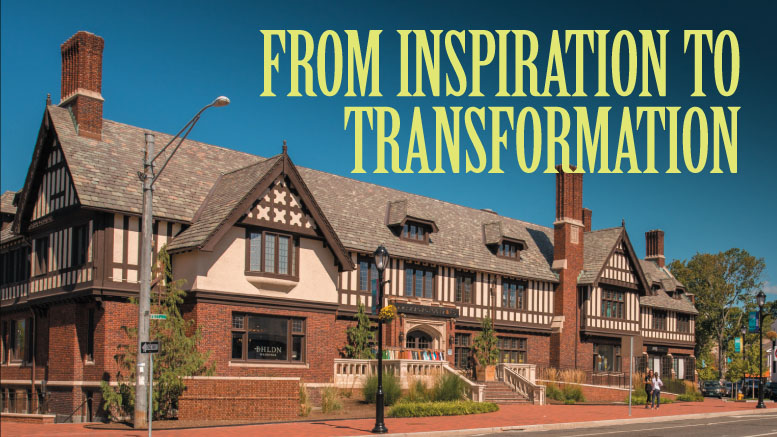 An hour’s drive from New York City, Westport, Conn., is an affluent community on the Long Island Sound marked by a quaint downtown and suburban living. When the YMCA’s representatives decided to move, the former complex’s prime location at the edge of the downtown historic district attracted the Bedford Square Associates’ developers, who are based in Westport. They purchased adjacent land to create a 1.5-acre site and commissioned Centerbrook Architects and Planners, Centerbrook, Conn., to design a 110,000-square-foot redevelopment. 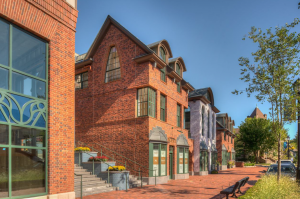 New buildings, which were inspired by the Bedford Building and Firehouse, feature retail at street level and apartments above.

“We created a very dense mixed use of retail, entertainment and residential units, which was unusual for Westport,” describes Jefferson B. Riley, principal at Centerbrook Architects and Planners. “Our goal was to restore the lost art of living closely together within this suburban- oriented town. The historic Bedford Building’s charm, scale and integrity served as the perfect inspiration for the rest of the project.”

Poised at the corner of Main Street and Boston Post Road, the Bedford Building’s hand-carved gargoyles and rake boards support its slate-shingled steep-slope roofs. Exterior walls of battens on stucco have ornate wood trim around windows and doors. “The building’s playfulness lent humanism to the project’s overall design,” Riley says. “We steered away from glass and steel modernism, but we infused contemporary design elements into the redevelopment to meet modern needs.”

To comply with historic district requirements, Centerbook Architects and Planners had to preserve the public street facades of the Bedford Building and Firehouse. Removal of the 1977 structures cleared the site for new residential units, community gathering spaces, public courtyards, pedestrian alleyways, tree-lined sidewalks and underground parking. Careful and selective demolition of the back side of the historic structures prepared the buildings to house stylish retail environments.

The team dug down approximately 20-feet behind the buildings to create an under- ground garage and add new lower levels for the Bedford Building and Firehouse. The Saugatuck River flows one-block away from the site, and it had been commonplace for the YMCA and portions of Main Street to flood.

“The water table is 2 1/2-feet above our parking-garage ceiling,” notes Mark Herter, associate principal at Centerbrook Architects and Planners. “We had to design the basements as bathtubs to deal with the ground water and resist hydrostatic pressure to an elevation 12-feet above sea level in order to meet the new FEMA flood elevations. We could have designed a massive slab, but installing 37 rock anchors was a far more efficient approach.” 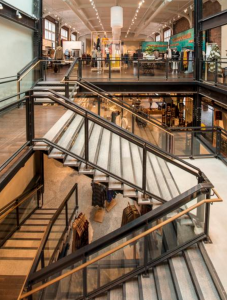 As part of the YMCA, the Bedford Building had two stacked gymnasiums on the northeast side, which offered open floor plates. By removing the gymnasiums’ 4-story south masonry bearing wall, a monumental stair and skylight connects all floors and fills whimsical retailer Anthropologie with daylight.

On the back side and beneath the two historic buildings, the team drilled 6-inch- diameter caissons into solid bedrock, which varied at elevations below the site at depths of 30 to 60 feet. Team members inserted cables into the caissons and epoxied them to the rock. Then, the cables were pre-tensioned and secured with a steel plate before the team filled the caissons with concrete. The cap of the rock anchor sits at the center of the slab within the reinforcing bars. Thanks to the rock anchors, the concrete slab can withstand a design flood pressure of 1,000 pounds per square foot. The new slab is 2-feet, 6-inches thick, compared to the 7-foot-thick slab that the YMCA had in its former pool.

The exterior masonry bearing walls are triple-wythe bricks, but they lacked the needed lateral structural integrity. Inside the basement of each building, the team built 12-inch-thick concrete walls to resist the hydrostatic pressure. Then, team members tied the rebar in the walls into the rebar in the slab to reinforce the system as a whole.

As originally built, the Bedford Building basement is a half-flight down and the first floor is a half-flight up. With the street elevation down at 6 feet, 9 inches, if the river were to flood, the basement would be 6-feet underwater. Centerbrook Architects and Planners added two sunken courtyards on the outside of the building with doors and larger windows to offer appealing retail display areas, enhanced daylight and better access. The openings required the team to devise a system that would protect the buildings from floodwaters.

As the Lines Between Architecture and Technology Blur, Learn How to Maintain Focus

Be the first to comment on "Two Historic Buildings Set the Tone for a Redevelopment in Westport, Conn."