Using the building perimeter for labs and the interior for support spaces is often the best strategy if the retrofit plan allows. This will maximize daylight in the most frequently occupied spaces as shown in Pearson Michael Chemistry Laboratory.

Many research facilities or biotech companies contain outdated laboratories. Today’s scientists require modernized laboratories that enable team research and facilitate collaboration. Antiquated facilities often fall short while consuming up to 10 times the energy of typical buildings because of their specialized HVAC requirements. Fortunately, there are ways older labs can be improved to meet the needs of scientists and consume less energy.

First, it is helpful to understand some of the key differences between older laboratories and ones built to current standards. For one, older laboratory buildings were designed with fixed rooms and systems and, therefore, lack flexibility. Research labs now call for open layouts and furnishing that can be moved around. Today’s scientists also prefer collaborative spaces, daylighting and, of course, new technology. 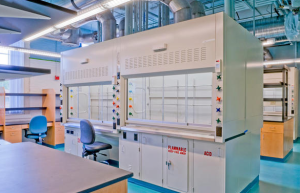 The main area where older laboratories fall short is in the excessive use of energy. Laboratories and other science facilities are among the most energy-consuming building types because fume hoods and special local exhaust systems that provide ventilation must change the air many times. This air cannot be recirculated because of the potentially hazardous nature of materials used in the hoods.

Current mechanical systems are vastly more energy efficient than those in older labs. The most effective strategies to reduce energy consumption incorporate reduction of unnecessarily high air-change rates and hood airflow, as well as updating mechanical systems with better controls and adding heat recovery for the supply and exhaust air systems.

Fume hoods, or air hoods, are large pieces of equipment similar to a cabinet that encloses a work area. At the front of the fume hood is a glass enclosure above the workbench called a sash. Fume hoods are designed to limit exposure to hazardous or toxic fumes to the lab workers. Chemicals or biological agents are worked with inside the fume hoods. Because most fume hoods are designed to connect to exhaust systems that expel air directly to the exterior of a building, large quantities of energy are required to exhaust the air, as well as heat, cool, filter, control and move the air that will replace the exhausted air. Older fume hoods constantly exhaust air even when it is not necessary.

Recent efforts in fume-hood and ventilation-system design have focused on reducing the energy used to operate fume hoods and their supporting ventilation systems. Therefore, the most effective air-reduction method involves replacing outdated fume hoods with variable-air-volume (VAV) hoods, which vary the amount of air exhausted. VAV hoods also provide significant energy savings by reducing the flow rate from the hood when the sash is closed.

If costs prevent installing new fume hoods, existing fume hoods can be retrofitted with variable-airflow controls that limit the airflow while still protecting the lab workers using the fume hoods. Energy savings also can be realized through the installation of fume hood sash restrictors, which reduce the openings (and amount of air intake) into the hood.

Retrofitting fume hoods to reduce airflow can cost several thousand dollars per hood. However, this is significantly less than purchasing energy-efficient new fume hoods. Significant paybacks can occur in a year or two when retrofitting existing fume hoods. These savings continue through the life of each hood. Utility companies also provide incentives for these types of energy savings.