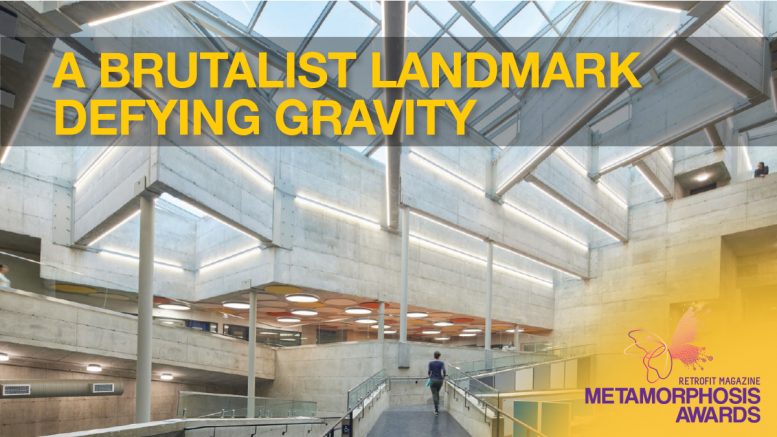 It sounds almost like a daredevil act or at least a contradiction: a building located beside a fault line, in one of the world’s most seismically active regions, that revels in structural agility.

Seen from above, the circa-1970 Brutalist-style former Berkeley Art Museum and Pacific Science Center (later renamed Woo Hon Fai Hall) looks like a handheld fan. Designed by San Francisco architect Mario Ciampi, its trapezoidal concrete terraces, each 5-feet higher than the last, together form one curving shape. Inside, its sky-lit atrium is marked by cantilevered balconies and terraced ramps, like a more cubist version of Wright’s Guggenheim Museum, encouraging motion and interaction.

“I get the privilege of seeing thousands of buildings in the Bay Area, and this is the most unique structure,” says Allen Nudell, a principal with Forell | Elsesser Structural Engineers; he and his wife went on their first date to the former art museum. “I mean, it’s really out there. It just defies gravity.”

The museum was constructed in 1970, before a succession of major earthquakes prompted more seismically stringent building codes. “If you had built that building even just a couple years later, it would have been completely different,” Nudell says. “The amount of rebar in the concrete would have been a lot greater.” By 2014, the building was deemed unsafe, causing the museum to move to another location. With a growing need for campus housing for the adjacent University of California, demolition seemed possible, if not inevitable.

Instead, after two years of construction, the 52-year-old building has been restored and reborn as the Metamorphosis Award-winning Bakar BioEnginuity Hub, a 40,000-square-foot incubator for science and engineering entrepreneurs designed by MBH Architects. Laboratories, offices and meeting spaces fill its raw-concrete-clad former galleries and cinema, as well as a glass-fronted addition. The hub provides research space for life-science startups and biotech companies, as well as a place for UC students, faculty and the private sector to connect.

“There are plenty of spaces in the building to gather and convene in different ways,” says Gino Segrè, Ph.D., director of the Bakar Labs, a network of smaller-scale campus laboratories overseeing the Bakar BioEnginuity Hub. “You can be alone or you can be in a room or a space with as many as 200 people.”

The original museum, located near the university’s school of architecture, was beloved by generations of architects, art lovers and moviegoers. A background sound-effect from 1977’s original “Star Wars” was even recorded in the building’s freight elevator (for a Death Star hallway door). San Francisco Chronicle architecture critic John King has called this “the Bay Area’s most emphatic example of Brutalism,” in a time when this architectural era is experiencing a revival in popularity.

If its nominally reinforced concrete made the building seismically vulnerable, this signature Brutalist material was also what made it special. “They used every trick you could think of for concrete,” MBH Architects Senior Associate Ken Lidicker says. “They did post-tension, they did one-way slabs, they did two-way slabs, they had upturn beams. The cantilevers are monstrous.” Like Nudell, Lidicker comes to the project with his own memories: The son of a Cal Berkeley professor, he and his brother were there in 1970 on the museum’s opening night. “We ran up and down the ramps all evening,” he laughs.

With its substantial seismic-upgrade needs and unique layout, the building needed a savior, which came in the form of Bakar Labs and its parent, QB3, part of the state-funded California Institutes for Science and Innovation. The Bakar BioEnginuity Hub is named for University of California alumnus Gerson Bakar, a real-estate developer and philanthropist whose foundation donated millions to the project (Bakar died in 2017). The project was also funded in part by a $70 million anonymous donation.

The two-year construction was made easier by the Berkeley Art Museum’s departure for a new Diller Scofidio + Renfro-designed headquarters, completed in 2016. “We could do more significant seismic upgrade work than if it was occupied,” Lidicker explains, in part by using the atrium. “It allowed us to delicately lower the brace frames into the building from above without doing a lot of damage and get them tied into the new foundation.”

Seismic exterior bracing, begun with a 2001 renovation, can now be seen on the interior: a series of X-shaped steel beams. “Each of the trapezoidal gallery levels had a concrete shear wall on one side. The 2001 temporary shoring exercise added bracing on a second side, outside,” Nudell explains. “Now we’ve added two more brace frames.” Yet the closer to the atrium one goes, the less visible the bracing is.

In a very large earthquake, the Bakar BioEnginuity Hub may still suffer irreversible structural damage, but it will give occupants time to evacuate. The new steel bolstering “gives it a very nice direct-load path down to the ground,” Nudell adds. “Our theory is that will prevent collapse.”

Inserting all the air-handling and electrical equipment necessary for modern laboratories also took careful planning with the building’s every last millimeter modeled using Revit software to take full advantage of the building’s utility columns. The team also converted its steam and gas-based heating system to electric. Even so, to meet the high-air-change requirements and exhaust-system requirements and to hide all the necessary ductwork from public spaces while introducing new air conditioning “was one of our biggest challenges,” Lidicker says.

The team also needed to place the building’s mechanical system in the basement to keep the roofline intact. “They actually built the building around those original mechanical systems,” the architect explains. “To get our equipment inside, we had to make our air-handling units in small pieces, slide them down the elevator shaft and then reassemble them in the basement. And then there’s a spiderweb of ductwork that goes out through the structural columns, which are actually hollow.”

The most distinctive change outside the building is its new 6,600-square-foot glass-fronted addition, which provides office space and acts as a more transparent face for the otherwise largely windowless building. The original atrium is also more lighted than it has been since the museum’s opening; over time, several skylights had been covered or heavily filtered to minimize heat gain, but the renovation added new UV-filtering clearer glass.

The original atrium and cantilevered balconies are as conducive to a science hub as they were to an art and film museum, giving aspiring scientists of complementary disciplines, along with entrepreneurs and investors, places to share ideas and connect.

“I see it every day walking into the building: CEOs and companies having interactions amongst each other,” Segré says. “We could have torn down the building and created a lot of walled suites, but that wouldn’t have served the idea of community.” The atrium, he adds, “makes the building a destination. And it demands or enables perspectives from a variety of different angles. There are really no right angles in this building. It’s complex. That’s a metaphor for the journey that that these tenants go through. The ramp still progresses upward, but it’s not a straight-line path at
all. I’m sure every entrepreneur would agree emphatically that that is their journey.”

A Massive Chicago Warehouse Now Is an Eclectic Mix of Uses, Including Thoughtful and Affordable Lofts

Sizing Up A Seismic Retrofit

Be the first to comment on "Vacated because of Seismic Concerns, Mario Ciampi’s Former Berkeley Art Museum Is Reborn as a Life-sciences Incubator"