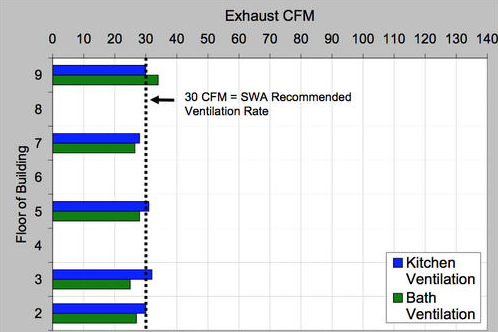 After the duct retrofit, ventilation on each Carlyle Towers’ floor was balanced. GRAPH: Aeroseal LLC and Steven Winter Associates Inc.

Ever since man first began living and working indoors, proper building ventilation has been directly linked to the relative health and safety of the buildings’ occupants. Over time, various methods were employed to facilitate the “proper” indoor flow and exhaustion of air. By 1925, assisted with the development of the electric power industry and the use of mechanical ventilation systems, 22 states had laws governing the minimum standards for indoor building ventilation.

Sealant particles do not coat the entire inside of the shafts but form a tight seal around individual leaks. PHOTO: Aeroseal LLC and Steven Winter Associates Inc.

Since that time, the majority of buildings in the U.S. have been constructed with mechanical ventilation systems that use the same basic design principles as those built in the 1920s and ’30s. Aside from the excessive noise often associated with these systems, commonly found leaks in the shafts result in uneven and inadequate ventilation. Like trying to draw water through a straw with holes in it, the leaks make it difficult for the roof fans to evenly draw air up through the shafts. To compensate, the fans are often turned up higher than should be necessary or replaced completely with bigger fans. As a result, upper-level spaces are typically overventilated while those near the bottom floors remain under-ventilated.

As bigger fans run at higher levels to compensate for leaks in the shafts, building owners face another significant issue: increased energy usage. According to a 2003 report published by Lawrence Berkeley National Laboratory (LBNL), Berkeley, Calif., “Thermal Distribution Systems in Commercial Buildings,” even a low leakage rate can lead to a substantial increase in fan power consumption and energy use. As dictated by the fan affinity laws, an increase in fan power is proportional to the required increase in flow rate to overcome the shaft leakage. Therefore, just a 15 percent leakage rate leads to a 25 to 35 percent increase in fan power consumption—an amount that can easily equate to thousands of dollars per month in additional energy costs for a single apartment building or other multi-floor structure.

Ask most experts in the field and they’ll say the reason poor ventilation is so prevalent in existing buildings is because of one simple fact: There is no viable solution. Adequately sealing ductwork requires direct access to the leaks. Because ventilation shafts are located behind walls and under ceilings, getting to those leaks requires tearing down the existing walls, fixing the shafts and then rebuilding. Building owners and regulation agencies opt instead to live with the problem—until now.

New York-based building consultants Steven Winter Associates (SWA) Inc. successfully completed the first comprehensive building ventilation retrofit in the Carlyle Towers, a 48-year-old multifamily apartment building in Caldwell, N.J., with 100 individual units. In doing so, the firm solved the unsolvable, proving that with the innovative use of new technologies, it was finally possible to adequately address the indoor air quality and energy-conservation issues that affect the vast majority of low- and high-rise buildings throughout the U.S.

Marc Zuluaga, P.E., is vice president and director of multifamily energy services at Steven Winter Associates Inc., New York. He has directed energy audits on more than 20 million square feet of existing buildings and leads a team that applies rigorous technical approaches to the evaluation and implementation of a wide range of building upgrades.