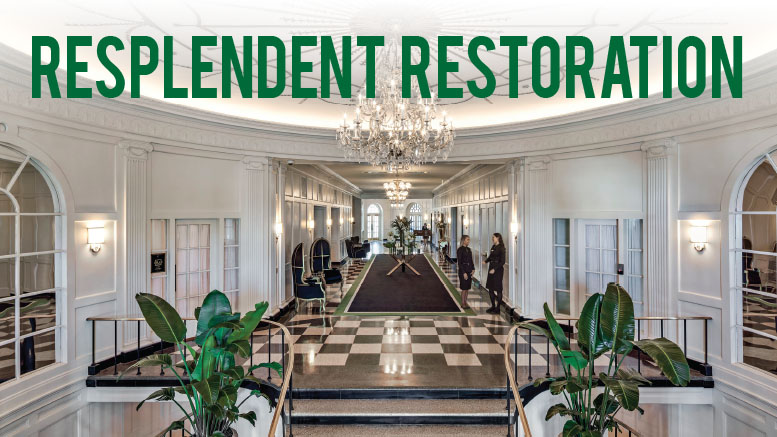 When the historic Cavalier Hotel in Virginia Beach, Va., reopened its doors on March 7, 2018, after an $85 million restoration, it was the end of a long journey for the circa-1927 icon and its owners—longer than anyone had anticipated. But it was also a new beginning. “For those who were familiar with the hotel from its earlier years, they appreciate the attention to detail and restoring pieces of it they loved,” says Bryan Cuffee, vice president of Virginia Beach-based Gold Key | PHR, the project’s developer. “At the same time, people who had not seen the property before appreciate that it touches on history but also brings forth a modern feel.”

For example, in the historic Raleigh Room, a social lounge off the main lobby that greets visitors with elegant gilded style, there is a reimagined likeness of the Mona Lisa in which DaVinci’s heroine is holding an iPhone. “That’s what we were really trying to do: be sensitive to that history but bring it to today,” Cuffee says. But the Raleigh Room also exemplifies just how many physical challenges there were. During renovation, a section of its ceiling collapsed, and some 25,000 square feet of concrete decking had to be replaced.

Believe it or not, this was just the beginning. “There were physical challenges all over the place,” Cuffee says, “but I can say that our owners were committed to doing it right.”

Designed by esteemed local architect Clarence Neff, the 7-story Cavalier Hotel’s neoclassical design was inspired by a host of Virginia landmarks. “It’s like walking through a slice of Virginia history,” says Design Principal Greg Rutledge, AIA, of Norfolk, Va.-based Hanbury, which restored the Cavalier. “The motor court is flanked by serpentine walls like those at the University of Virginia. The main portico is a replica of one at Monticello. The plaster medallion in the rotunda is an exact copy of one in a historic building in downtown Norfolk. The lobby reflects the big paneled walls of the historic plantation homes there. Every room is adorned with the most beautiful plaster work and woodwork. What’s interesting is he created this crazy Y-shaped floor plan and a 7-story tower to capture views, yet was still very successful at applying classical motifs to the building. A lot of people say it looks bigger than it really is because it’s so grand in its setting.”

Yet behind the architectural ornament, the approximately 130,000-square-foot hotel was about as sturdy as a sandcastle: its steel framing so rusted that it was literally disintegrating from the inside out. This was true not only of the original 1927 framing, but even the steel from a 1990s renovation of one wing. Why so much damage? Coastal high winds and salt air contributed, but the real problem was façade penetration. The original frame was built directly behind the masonry veneer, which opens up potential for cracks in the masonry, as well as steel rust. Then there were the head joints in the façade, where holes had been drilled into the brick to allow water to drain. Instead, the holes let the water inside.

Fixing the problem was tricky. “We had to perform all the steel replacement from the inside out. We didn’t want to disrupt the masonry skin,” Rutledge explains. “We knew we couldn’t repoint the brick on the whole building. We’d have done more damage than good. So we hung scaffolding around the building and for a year we found every hole we could, cut out the head joint and repointed it.”What the architects did not do, however, was repaint the exterior cast stone decoration, a decision that initially caught the client off-guard. “It had been painted a few times over the years, and we spent a lot of time stripping that paint off,” the architect adds. “The cast stone has an aged patina, which I think adds a whole lot to the façade.”

The famed indoor saltwater pool provided a typical if mysterious problem. “It leaked like a sieve, and we did not know where the water was going. It would just disappear,” Rutledge remembers with a laugh. “So we had to basically build a new pool inside that old pool.” The renovation did something more, though: It made the Cavalier pool area feel like 1927 again, with its originally high ceilings, crown moldings and arched windows made operable again to capture the sea breezes. Surrounding balconies with their iron detailing, as well as the tiled monogram of the hotel’s name on the pool floor, were all made new again, as well, and a new spa and fitness center were added.

If the bones of the building needed radical reconstructive surgery, the good news was that the interiors, particularly the grandest public spaces, were mostly still there as originally designed and only needed cosmetic attention. The original paneling, plaster ornamentation, terrazzo flooring and painted ceilings were all reconditioned to historical accuracy.

Flexible yet Rigid Tubing Is for Plumbing and Radiant Heating Applications

Be the first to comment on "Virginia Beach’s Landmark Cavalier Hotel Nearly Collapsed; Now It’s Ready for Another 100 Years"