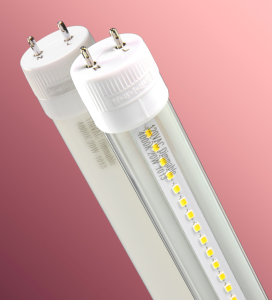 LEDtronics LED T8 tube lights come in standard fluorescent T8 lengths, such as 2, 3, 4, 5, 6, 8 foot, in clear and frosted lens and operate on a wide input voltage range of 90 to 290 volts AC, thus accommodating North American or European currents. The LED T8 are also available in low voltage 24~72VDC for transportation like rail and bus applications. These LED T8 tube lights typically consume between 8 Watts to 38 watts at 120VAC, depending on tube length and LED Kelvin color. That’s 45 percent to 50 percent energy savings over the traditional fluorescent tube lights. They produce total lumen output of 500 lm to 3,482 lm depending on LED T8 tube lengths, clear or frosted lens. These LED T8 tube lights are offered in a wide selection of white light Kelvin color temperature ranges to select from between 2750K to 5600K. They provide a wide beam pattern from 110 degrees to 140 degrees. Some models are equipped with adjustable or ratable end caps to make the installation easier, allowing the installer to direct the light in the direction it is needed. Other viewing angles, tube lengths and a variety of LED light colors are available for large orders.

When it comes to rated life, LEDtronics series of LED T8 tube light really shines. While conventional fluorescent lamps typically have an ideal-condition rated lab life in the range 8,000 to 24,000 hours, the LEDtronics tube lights boast a real world operating life of 50,000 hours and more—that’s over 5.7 years of continuous light output. Furthermore, since the LED lights produce so little wasted heat, the temperature inside the fixture does not build up as it does with conventional fluorescent tubes. That means the LED tubes produce less heat, which saves on display case and freezer air-conditioning costs.

The sturdy construction of a UV-resistant polycarbonate housing over the LED tube provides increased protection—no glass to break and no mercury environmental hazards to worry about as with fluorescent tubes. In addition, the housing shields against many environmental effects, allowing them to be placed in locations where typical tube lights would be more vulnerable to the elements, thus eliminating the additional expense of light-robbing plastic tube guards—a major problem in the food industry. Also, LEDtronics tubes perform well in a wide range of ambient operating temperatures: ~-22 F to ~+122 F, making them ideal for applications subject to frequent on-off cycling or very low temperatures, such as in food freezers and coolers.

Solid-state design renders LEDs impervious to shock, vibration, frequent switching and environmental extremes. Savings from reduced maintenance costs and downtime quickly return the capital investment expenditure, making them as friendly to the environment as they are to the operating budget. The LEDtronics T8 tubes comply with RoHS—the lead-free and mercury-free European directive. They emit no infrared or ultraviolet radiation. Unlike conventional fluorescent bulbs, LED lights are not disposed of as hazardous waste at end of life.